By now, it is no secret that I am a television fanatic – one who harbors an almost unhealthy level of attachment to my favorite shows and characters.  Inevitably, each year, there comes a time when a show on my viewing roster will go on hiatus.  (In the case of cable shows – a LONG hiatus!)

I will be the first to admit, that I do not always accept these “breaks” from my shows like the mature adult I am supposed to be.  Back in November, after Mad Men aired its Season 3 finale episode, the fantastic “Shut the Door, Have a Seat,” I took the parting particularly badly . . . 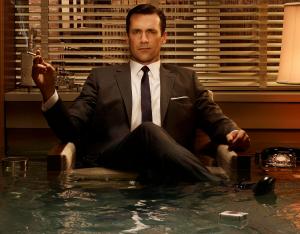 In fact, I would say, I cycled through ALL FIVE of Elizabeth Kubler Ross’ stages of grief, in a span of just a few months:

Denial: “It is Sunday night, 10pm.  Mad Men MUST be on!  If I put on AMC, and watch this crappy old movie, I am certain that the movie will magically convert into a new Mad Men episode!”

Anger: “It is 12:00 p.m!  I watched that entire crappy movie!  It never turned into Mad Men!  I am going to throw this lamp at my television!”

Bargaining: “OK.  I just bought a new television.  AMC, if you  put Mad Men back on, I promise not to throw a lamp at THIS television.”

Depression: “I just ruined two of my televisions!  I can’t afford to buy another one!  Life sucks.”

I DO NOT recommend this method of coping with the loss of your favorite shows.  For one thing, it is very expensive.  To prevent you, dear reader, from doing what I did, I have come up with seven significantly cheaper and less destructive methods for coping with the loss of Mad Men.  These suggestions  should tide you over, until the show returns to our television screens this July.

This is probably the most obvious way of getting your post-season Mad Men fix, as it will enable you to enjoy hours and hours of Don Draper-ey goodness on your own time schedule.  The first two seasons are already available on DVD.  The third WILL be available for purchase on March 23, 2010.  However, you can pre-order it here.  According to Amazon.com, buying all three DVDs will set you back about $75.00.  (Not exactly cheap – but way less expensive than a new television . . .)

Low on funds, but still need your Mad Men fix?  YouTube has a few choice clips from the show that you might enjoy.  (I’d love to post one here for you, but AMC does not allow you too embed its videos – phooey!)  Instead, please enjoy this fan video involving my two favorite Mad Men characters: erstwhile ingenue Peggy and erstwhile villian Pete . . . 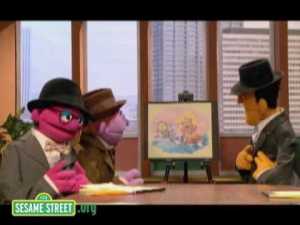 They say that “mimicry is the sincerest form of flattery.”  If that’s the case, the folks at Mad Men should be SINCERELY FLATTERED, because everybody and their mother is putting out some sort of spoof or parody of the show this year.  You can check out the above-pictured “Mad Men” during a reoccurring skit on Sesame Street.  Or, watch The Simpsons, for this gem . . .

Aside from the aforementioned DVDs, a few Google and Amazon.com searches can lead you to all sorts of Mad Men goodies, including:

. . . this Sterling, Cooper, Draper & Pryce t-shirt that allows you to show your support for the brand new ad executive team;

this Mad Men martini shaker, perfect for taking a little nip at the office; 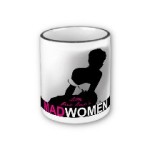 this MAD WOMEN mug, because it isn’t always about the boys; and

these Mad Men – inspired Barbie dolls, which are adorable, but, unfortunately,  (1) cost $75 a pop, coincidentally, the same amount it costs to buy all three Mad Men DVDs together, and (2) aren’t on sale until July 2010.  By then, we will have the real thing to enjoy! 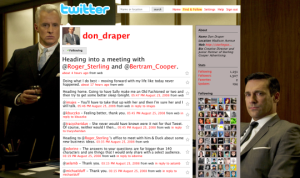 Talk about an anachronism!  On Mad Men, our favorite advertising executives are still using type writers.  But, apparently, in the virtual world, they are all about the Twitter.  I’ve read that there was some controversy about these character-inspired Twitter accounts, which were fan-created.  In fact, at one point, AMC sought to have them removed from cyberspace.  Fortunately, the pages are back and ready for you to enjoy.  Here are just some of the Mad Men on Twitter today.  (You can view their pages, by simply clicking on the links provided.)

6) Find out which Mad Men character you are.

When I was younger, I used to love reading Teen magazine.  I particularly enjoyed taking all of those kind of lame, not particularly accurate, personality quizzes they always had in there.  Fortunately, AMCTV.com has created a slightly improved online version of those quizzes, inspired by its most successful television program.

The first time I took the quiz, it told me I was most like “Duck Phillips.”  I was a little insulted.  But either they have changed the quiz in the past few months, or I have changed.  Because, I took the quiz again today and got “Joan Holloway!”  Awesome! 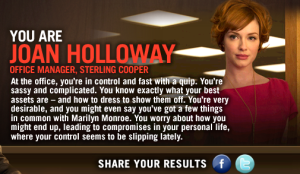 You can take the quiz here.

7) Transform yourself into a Mad Men character.

Another cool thing to do on AMCTV.com is to make yourself into a cartoon Mad Men-themed avatar.  The computer program allows you to choose between male and female avatars, and customize your character, by electing from any number of faces, body types, clothing styles, accessories, and backgrounds.  Here’s mine: 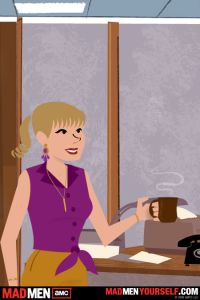 Those of you who have met me in person, can confirm that I actually sort of look like this . . .

You can create your own Mad Men Avatar here.

There you have it.  Hours and hours of HEALTHY Mad Men-themed enjoyment, certain to keep you occupied (and sane), while you wait for the show’s Season 4 premiere. Now, you no longer have any excuses for throwing lamps at your televisions.  OK?