Here at TV Recappers Anonymous, we love ALL of our sexy television and movie men.  But, admittedly, some of them get more love than others.  Lately, Ian Somerhalder has been getting the MOST love of them all!  Right now, you probably know him best as Damon Salvatore from The Vampire Diaries.

On that show, he is the “big bad,” quite possibly sociopathic, definitely vampiric, 160 plus-year old, older brother to Paul Wesley’s Stefan Salvatore.

In his role as Damon Salvatore, Ian plays a man with a serious thirst for blood, a penchant for the ladies, and a soft spot for one Elena Gilbert.

Did I mention he owns a mansion, and enjoys dancing around it half naked?

(Click the internal link below, to view the video)

Now while all of this is FABULOUS for us fans,  The Vampire Diaries only airs once a week.  In fact, there are only TWO more episodes in the season.  Very soon, Somerhalder fans will be faced with a summer-long draught of open-shirted, brow-furrowed, snarky commenting, fabulous dancing goodness.  After all, there are only SO MANY Damon Salvatore fan videos you can watch on YouTube!

This is where I come in . . . You see, believe it or not, before The Vampire Diaries, Ian Somerhalder was actually in OTHER STUFF!

Shocking, I know!  The purpose of this blog entry today, is to help guide YOU toward Ian Somerhalder YouTube Nirvana.  This way, once The Vampire Diaries is on hiatus (after you’ve broken the virtual “Play” button on your “Damon and Vicki Dancing Webclip,” and after you have watched every single Damon Salvatore fan video known to man), you have some other places to look, in order to satisfy your Somerhalder-sized cravings . . .

This short-lived WB series (pre-CW) about an all-boys boarding school wasn’t around that long.  In fact, the show (a spinoff of the popular teen drama Dawson’s Creek), only lasted about eight episodes.  And yet, in that brief amount of time, it managed to REALLY push the envelope with some surprisingly risque storylines.  Most notably (of course, otherwise why would I include it here?) was the plotline involving Ian Somerhalder’s character, Hamilton Fleming, the All-American son of the school’s dean.  In the pilot episode, he meets a “boy” named Jake Pratt.  The two quickly bond and become friends.

The problem?  Heretofore straight Hamilton soon finds himself attracted to Jake, who Hamilton thinks is gay (Jake tried to kiss him near the end of the first episode).  So, of course, Hamilton begins to wonder whether he is gay too.

Hamilton may very well be gay.  But here’s the thing: Jake is a GIRL!  For reasons that I never quite understood (something about getting revenge against her absentee mother) “Jake” a.k.a. Jacqueline posed as a boy to attend the all-boy school.  In the below scene, which was highly reminiscent of the prom scene in that old 80’s flick, Just One of the Guys . . .

(This film is VERY dated.  But it’s a good Netflix rental, if you’re ever in the mood for a gender-bending good time . . .)

This film, which was based on a very jaded and dark, but oddly insightful, novel about college life, written by Bret Easton Ellis (Less than Zero, American Psycho), featured a fairly impressive cast of hot up-and-coming early twenty-something actors, most notably: Dawson’s Creek‘s James van der Beek, playing a decidedly un-Dawson like role . . .

(Joey Potter would not approve.)

. . . and Kate Bosworth (who, coincidentally, also starred in Young Americans with Ian Somerhalder)

Here, Ian plays the bisexual and sexually frustrated Paul Denton, a man who seemingly has only two favorite pasttimes: sex and dancing.  Lucky for him (and us), he gets to do both throughout the movie .  . .

Unfortunately, for my purposes at least, the creators of The Rules of Attraction don’t allow embedding on ANY of their original webclips on YouTube.  However, there are literally a TON of them out there.  Just type “Ian Somerhalder” or “Paul Denton”  and “Rules of Attraction,” and you are bound to find them all.  Not surprisingly, most of my favorites of these  involve a shirtless Somerhalder dancing and jumping on a hotel bed in his boxer briefs.

Remind you of anything?

Those of you who have read this blog before, know that I am a big fan of early Lost episodes, particularly those from the show’s first season.  Of course, THIS GUY had a lot to do with that . . .

Boone Carlyle was everything you’d want in a guy.  Kind-hearted, loyal, intelligent, brave, resourceful,well-to-do, athletic, and dead sexy.  So, of course, the Lost writers had to crush him with a plane and kill him near the end of Season 1.  But before that happened, we got to watch him, through flashbacks, engage in a VERY inappropriate sexual relationship with his younger stepsister, Shannon.

And, you know what?  As much as you REALLY didn’t want to like these two together (Aside from being his relative, Shannon was a manipulative bitch, who basically treated Boone like crap his whole life, and used his feelings for her to con him out of $50 grand.), you just couldn’t get away from the fact that they were both so DAMN HOT!  The chemistry between Maggie Grace and Ian Somerhalder was so smoldering, they practically burnt a hole in your television, every time they were on screen together.  Watch this clip, if you don’t believe me . . .

Need more?  Type “Boone and Shannon” and “Lost” into your YouTube search bar, and you will find plenty more where that came from . . .

That’s all for now, Somerhalder fans.  Just a little something to whet your appetite during those long HOT Vampire Diaries – less months. 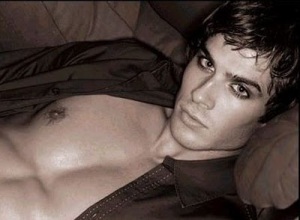