Should old acquaintences be forgotten? – A Mini-Recap of Boardwalk Empire’s Season 3 Premiere “Resolution”

Pop open that bottle of champagne, and start singing Auld Lang Syne, because another New Year has just begun in Atlantic City.  It’s 1923.  And despite the fact that some of our “old acquaintances” have gone “mysteriously missing” (R.I.P. Jimmy and Angela Darmody) . . .

Here at TV Recappers, we still think it could shape up to be a pretty awesome year.  Below are ten reasons why . . .

Meet Gyp Rosetti.  He just got a flat tire on the way to AC.  To add insult to injury, now one of his henchman is sassing him, by indirectly implying that he’s an idiot for not knowing that 3-in-1 is another name for oil.  (Well, I didn’t know that.  Did you know that?)  So, Gyp Rossetti does what any of us would do in such a situation.  He beats the guy to death with a tire iron, and then “inherits” his adorable dog.  Wait . . . WHAT?

We’ve all seen this kind of thing before, in mob movies . . . a scene designed to show the mobster’s volatile temperament, his mean streak, and his penchant for bashing the crap out of things with tire irons and/or bats and/or pistols.  Deniro did it in The Untouchables . . .

But neither of them adopted a dog at the end of the scene.  And dogs make everything better, don’t they?  Yes, even tire-iron beatings . . .

Because you are as baffled as I am that Mickey Doyle has managed to survive yet another episode . . .

From the moment he pulled the trigger on surrogate son, Jimmy Darmody, we all knew it was only a matter of time, before Nucky Thompson fully embraced his gangster persona.  We see that persona, in full force, as we watch Nucky interrogate a rather pitiful looking thief, who had the misfortune of stealing booze from Mickey Doyle’s warehouse, while the latter was out taking a leak.  “Which one of you was doing your job?”  Nucky asks pointedly, in a line of questioning that alternately rewards the thief for his “work ethic,” while decrying Mickey Doyle’s inability to “keep it in his pants” until after his shift is over.

“Ooh,” we’re all thinking to ourselves.  “Mickey Doyle is really going to get it this time.”

After all, this is the guy that’s been thrown off a balcony by Jimmy, and beaten within an inch of his life, by pretty much every gangster on this show.  Mickey Doyle is a cat with nine lives, but he already seems to have used up at least seven of them . . .

Make that eight, because despite Nucky’s seeming respect for the thief, it wasn’t enough to keep him from having Manny Horvitz shoot the latter in the head, moments after he gave up the name of his accomplice.  And Mickey?  Well, it seems that he will live to be bad at his job, another day . . .

Because Jimmy Darmody would be rolling over in his grave, if he knew his kid was calling that wackadoodle “Mommy” . . .

Oh little Tommy.  I’ve got some good news for you, and some bad news.  The good news is that you’re a cute kid.  Both of your parents were hot, and that makes you a winner of the gene lottery.  Here’s some more good news.  You’ve got the Best Caretaker Ever in Richard Harrow  . . . a guy who, not only, will take you to the carnival, whenever you want to go, he will also win you every prize in the place, because he’s an excellent shot (more on that later).

But here’s the bad news.  You’re grandmother’s a TOTAL nutbar.  She’s raising you in a whorehouse, and forcing you to call her “Mommy.”  You might not remember this, Tommy, but things didn’t exactly work out so well for the last guy who called Gillian Darmody “Mom.” 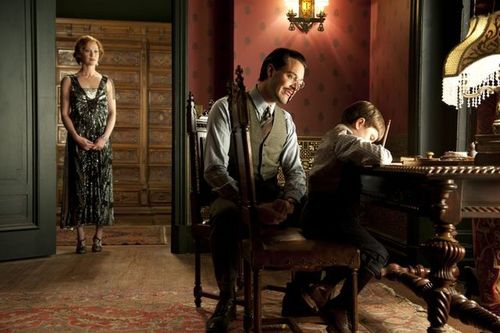 Here are a couple of tips for you, Tommy.  Stay away from the Nutbar.  Keep Harrow by your side.  And emancipate yourself from the whorehouse the minute you’re old enough to buy your own juice boxes . . .

Because you knew Nucky was boning Billie Kent, the minute she drank out of his champagne glass . . .

Every good gangster has a mistress.  Now, Nucky Thompson, is no exception . .  .

I don’t know.  I get that Margaret can be a bit of a cold fish sometimes.  And I’m sure Nucky is still holding a grudge against his wife for the whole “gave my multi-million dollar tract of land to the church” thing.  But I just can’t support this Billy Kent person.  She just seems a bit too Lucy Danziger 2: Electric Boogaloo for my taste.

Because Van Alden is getting better and better, every day, and in every way (just ask him) . . .

It’s not easy being a salesman.  Just ask Arthur Miller, and now, Van Alden, who is still living under the assumed name of “George Mueller” with his baby’s caretaker, who, sometime in the past year, made a little mini-Van Alden of her own with him . . . weird.

The way to every woman’s heart, is her through her lemon . . .

Apparently, being a door-to-door iron salesman is the 1923 equivalent of telemarketing.  Nobody wants your product, and everyone is constantly slamming the door in your face.  Given all that, you can certainly understand why Van Alden’s “I’m great.  I’m wonderful.  Everybody likes me,” daily affirmations have done little to lift his spirits.

But Van Alden’s luck might just be changing, when he unwittingly saves an enemy of Al Capone’s from meeting his demise on New Year’s Eve.  By way of thanking him, the proud gangster purchases no less than TWENTY FOUR of Van Alden’s ridiculous irons.  (I guess they could be used as weapons . . . just ask Gyp Rosetti).  Van Alden is thrilled, believing that this windfall will be enough to win him the coveted Salesman Prize, which will give him enough loot to buy the “wife and kids” a new house . . .

Unfortunately, just like Charlie Brown, Van Alden seems like one of those guy’s who’s destined to have the football pulled out from under him, just when he’s about to kick the field goal.  One of the poor guy’s colleagues ends up taking the prize, based on a technicality, leaving Van Alden to shuffle home empty handed.

Somewhere in Heaven, Agent Sebso is pumping his fist in triumph.  “That’s what you get for baptize/murdering me,” he cries.

Because that little dog is your new favorite character on the show (obviously) . . . 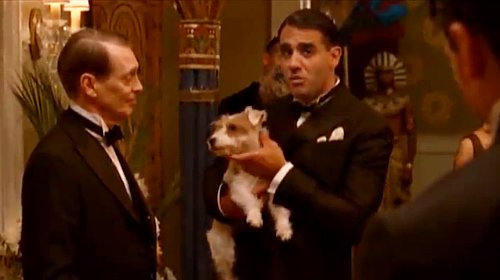 What can I say?  I’m a sucker for a cold wet nose.  And as much as I would have loved to see the tough-as-nails Gyp Rosetti cuddling a cute pooch with one hand, while kicking the crap out of people with another, for an entire season, for the pup’s sake, I’m kind of glad he ended up giving the canine to Mrs. Schroeder-Thompson, toward the end of the episode.  Somehow, I just can’t picture Tire-Iron Killer Guy cleaning up dog poop, and buying kibble . . .

Because Al Capone and Nucky Thompson make New Years’ Resolutions they know they can’t keep (just like YOU!)

Forget “losing ten pounds” and “exercising more,” when a gangster makes a New Year’s Resolution, lives are typically at stake, when he inevitably breaks it.   And, if history is any indication, I’m thinking Al Capone’s resolution to “think first, kill later,” and Nucky’s promise to “only sell liquor to Arnold Rothstein,” aren’t going to last much past midnight on January 1st . . .

Because you’ve been secretly wishing all year that someone would invite you to a party, where they give out free gold jewelry to everyone in attendance . . .

Now, I get that the Thompson’s New Year’s Party was “Egyptian-themed.”  But honestly, couldn’t they have found a cheaper way to pay homage to King Tut, than giving their 100 plus party guests gold baubles.  For example, they could have dressed Driver Eddie up as a mummy, by wrapping him in toilet paper.  Or they could have made everyone wear those stupid pharaoh hats.

Because you are secretly hoping Margaret is still humping Owen Sleater, and you fear this makes you a Bad Person . . .

Right . . . because Owen’s inquiry to Margaret about whether the house needed “more champagne,” wasn’t TOO filled with sexual innuendo, was it? 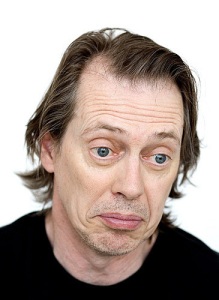 Because you may or may not have clapped when Richard Harrow got his revenge against Manny Horvitz, and you KNOW this makes you a Bad Person . . .

Don’t wait up, Mrs. Manny Horvitz.  Something tells me, the Butcher won’t be home for dinner . . .

Until next time, my fellow Boardwalkians . . .

12 responses to “Should old acquaintences be forgotten? – A Mini-Recap of Boardwalk Empire’s Season 3 Premiere “Resolution””