From Being the Eternal Stud to “Taking Care of the Kids” – The Vampire Diaries Season 4 RE-Vamped Part 2: Damon Salvatore

“I’m just stuck here fighting my brother, and taking care of the kids,” gripes Damon Salvatore to a ghostly Alaric in the middle of Season 4.

It’s a line that pretty well encapsulates the Elder Salvatore Brother’s role this season, in the same way that “Life sucks, wear a helmet,” another iconic line of his, embodied his role in Seasons 1 through 3.

Like many things about this season, being a Damon fan was a bit of a mixed bag in Season 4.  On one hand, in comparison to other seasons, the self-proclaimed stud had things pretty easy.  I mean, sure, he had his share of beat downs, stakings, and neck snaps, but there seemed to be a lot less of them than in previous seasons.

Even his “Lethal Werewolf Bite,” in the Season Finale seemed less painful and certainly less symptomatic than his similar Brush with Death in Season 2 .. .

Also on the bright side of things, let’s not forget that DAMON FINALLY GOT THE GIRL . . . not just once, but TWICE in a single season.

And even during the episodes when Damon and Elena weren’t together, he was constantly proving his worth by supporting and accepting her, when others turned their backs.

Well, this was actually the first season that Damon Salvatore came very close to assuming Sidekick Status on his own show!

In previous Seasons, Damon Salvatore always had his own distinct character arc . . . one that was refreshingly separate from, though always tangentially related to, whatever drama he had going on with Stefan and Elena at the time.

In Season 1, Damon transformed himself from an angry villain hell bent on vengeance against his brother, and the town that sent him on his path to destruction .  . .

. . . to a hero, willing to risk his life for that very same brother and town.

In Season 2, Damon went from a lovesick puppy, who pined over the same woman over a century at the expense of everything in his life, to a man capable of sharing his heart and soul, not just with one woman, but with three: Elena, Rose and Andie, each in different ways.

In Season 3, Damon struggled to find a balance between his loyalty to his absent brother, and his undeniably intensifying relationship with Elena.  As if that wasn’t difficult enough, he also endured two huge losses.  Alaric and Andie were the only two people with whom Damon felt he could truly confide, without judgment or accusation.  When they died, he felt more alone than ever . . .

In Season 4, Damon’s character arc was noticeably less distinct.  He helped Elena deal with her newfound vampirism.  He coped with the implications of the sire bond, and what they meant to his love life.  He mourned the loss of Elena’s humanity.  He struggled with the decision of whether or not to give Elena the Cure to Vampirism.

Can’t a guy get a storyline to himself?

That said, Damon did have quite a few defining character moments this season.  And I would be remiss, if I didn’t point them out in this post.

I find it interesting that, in the premiere episode of the Season, Damon blames, and wants to kill Matt, for his unwitting role in Elena’s Journey Toward Vampirism.   (Had Stefan allowed Matt to die, Elena would have stayed human.)  And yet, at the end of the Season, Damon is the only character to recognize that Matt is the key to Elena’s regaining her humanity.  Damon’s ability to ultimately accept Matt as an integral part of Elena’s life, shows a huge amount of growth on his part . . .

As a staunch and unapologetic Damon Fan, I was deeply offended by the fact that all the kindhearted things that Damon did for Elena during her early days as a vampire, were immediately discounted by TVD characters, and fans, alike, as a result of that pesky sire bond.   Yes, the sire bond was arguably to blame for Elena’s initial inability to drink blood from anywhere other than the human vein.  And yes, the sire bond both initially triggered Elena’s suffering from the Hunter’s Curse (Damon accidentally suggested that Elena should kill Connor), and ultimately cured her of that same curse.

But that doesn’t make the unconditional love and acceptance Damon showed Elena during those difficult early weeks of her transition any less sincere.

After all, Damon knew nothing about the sire bond, when he took Elena under his wing, and helped her to accept her new life as a vampire.  He helped her, comforted, and supported her, when no one else would, not because he knew she was supernaturally programmed to obey his every command, but because he loved her unconditionally, even during those times when she was at her most vulnerable and least loveable . . .

If Damon had his choice, he never would have chosen the Sire Bond for Elena.  So, why should he be punished for its existence?

Punish the writers for that one!

Though Damon cannot be held responsible for the Dreaded Sire Bond, he’s a bit more culpable when it comes to the birth (and eventual “death”) of Humanity Free Elena.  Hard to shift blame on THAT one, especially when Damon literally MADE Elena turn it off . . .

Now, in Damon’s defense, his heart was certainly in the right place.  In one sense, Damon understands Elena’s dark side, in a way no one else does.  He knows and respects the part of her that isn’t all hearts and roses.  Damon also hates to see Elena in pain, and instinctively understood, that, in the days, following her last living relative’s untimely demise, Elena needed a vacation from the more self-righteous aspects of herself.

What I think Damon SERIOUSLY underestimated, was Elena’s capacity and hidden affinity for BAD.  In a way, it was almost comical how shocked and offended the Salvatore Brothers were, when Elena started being rude and biting strangers, when that’s precisely what EVERY SINGLE VAMPIRE DOES WHEN HIS HUMANITY IS TURNED OFF!

Now, don’t get me wrong, I didn’t like Humanity Free Elena either.  But, perhaps, her existence was necessary, in order to get Damon and Stefan to take her down from that pedestal they both kept her on for three seasons.

The Pedestal . . .   Here was yet another way that Damon proved himself worthy of Elena’s love this season.  While Stefan promptly washed his hands of Elena, the moment she stopped behaving all sweet and cuddly around him . . .

. . . Damon merely shrugged off Elena’s “evil” antics, and became more determined than ever to get her the Cure . . . even if that meant losing her to her brother for good.  (And let’s not forget, that it was ultimately Damon who discovered the precise route toward FINALLY putting Elena’s humanity on reboot.)

Damon made no bones about how he felt about the Cure.   He didn’t want it.  And he didn’t really want Elena to take it either.  Because as much as Damon deeply misses being human, and the touching vulnerability that comes with it .  . .

. . . he loves being a vampire more.  And I’d like to think that Damon wanted that for Elena too . . . wanted her to learn to accept the odd joys of vampirism, and come to accept her new self, even more than he simply wanted her in his bed at night .  . .

Yet, nonetheless, when Damon got his hands on the cure, at the end of the season, he was going to give to Elena . . . even though her humanity was on, and she was back to herself.  He was willing to give it to her,  if she desired it, because he valued her happiness above all else . . .

Damon Salvatore is not a black and white character.  He lives in the shades of grey, in between, even in seasons like this one, designed to show off his “softer, more romantic side.”    That’s what I’ve always loved about Damon.  Just when you think he’s going to go and get all mushy on you, he does something surprisingly shallow, like choosing death over taking the Cure, aging, and wrinkling that pretty face of his .  . .

I adore the fact that Damon can still be selfish and shallow, because it makes him all that much more real to me.  And I guess, based on Elena’s ultimate choice in the Season 4 finale, Elena Gilbert feels the same way . . .

Even an Eternal Stud Needs an Ego Stroke, Every Once in a While . . .

When every woman in the world is a sly smile, and compulsion-laced stare away from sleeping with you, it’s easy to get a swelled head. 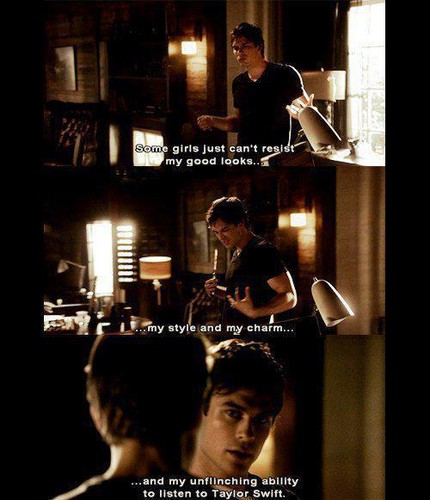 Damon Salvatore always did a pretty stellar job of portraying himself to the world as self-assured, to the point of arrogance . . . about his looks, his strength, and, most importantly, his sexual prowess.

But beneath all that bluster and bravado, was a vulnerable vamp who was surprisingly insecure . . .  one who had been taught, by the first woman he had ever loved, that no one could ever love him, on his own merits.

In past seasons, it was always the external things that kept Damon from finding happiness with Elena.  HER feelings for Stefan . . . HER distrust of Damon’s motives . . .HER fear of the dark influence loving Damon would have on her soul.  But in Season 4, the greatest enemy to Damon’s finding happiness with Elena was Damon himself.    As thrilled as Damon was when Elena FINALLY chose to give herself to him, in early Season 4, he was also cautiously skeptical.

And it was this skepticism, that plagued his consciousness with doubt of Elena’s true feelings, the minute that pesky sire bond came into play . . .

After four seasons, Damon had come to accept Elena’s rejection, as a matter of course.   So, when she behaved differently with him, it was difficult for him to lower his guard and just live in the moment.

The look on Damon’s face in the Season finale, when Elena FINALLY chooses him, of entirely her own accord, is one of beautiful ecstasy, but also one of shock . . . almost as if he can’t believe that fortune and true love have finally found him . . .

Damon’s happiness in “Graduation” is hard fought, and well deserved.  As Damon fans, we rejoice in the opportunity to share this with him  . . .

At least until next Season, when the writers will undoubtedly screw it up . . .

Next up?   The Big Bad with an odd penchant for drawing snowflakes, and collecting Caroline-sized dresses in his closet . . . Of course, I’m talking about Klaus Mikaelson .  . .

See ya then, Fangbangers!

Filed under Damon and Elena, Damon Salvatore, The Vampire Diaries

6 responses to “From Being the Eternal Stud to “Taking Care of the Kids” – The Vampire Diaries Season 4 RE-Vamped Part 2: Damon Salvatore”