It seems like it was only three episodes ago, that we were meeting sexy Dr. Ben, a.k.a. the Gas Man, for the first time, and rooting for him to dethaw the icy walls of Miranda Bailey’s heart . . . Oh, wait . . . it WAS three episodes ago!  So you could imagine my surprise, when I opened up my Entertainment Weekly (online, of course), and came across this little gem . . .

Apparently, that bitchy resident from last week’s flashback episode isn’t the only one who has it in for our feisty heroine . . . 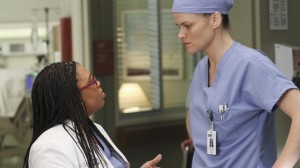 “I’ll get you my pretty, and your little (VERY little) love life too!”

. . . Shondra Rhimes is getting in on the act too.  Seemingly, just minutes after Bailey and Ben became an official item, Rhimes kidnapped Dr. Ben (who is played by Jason George) and whisked him off to star in yet another one of her pilots.  The name of the drama pilot responsible for the “Gas Man Snatching” is Off the Map.  And I bet you can’t guess what it’s about?

Yes, Rhimes has seemingly murdered Bailey’s last chance to get laid, all for a show about medics who practice at a clinic on a tropical island.  A medical drama?  About doctors who practice a laid-back form of medicine in a relaxed climate?  What a novel idea!

Sorry Bailey, it looks like your man has just been Addisoned . . . 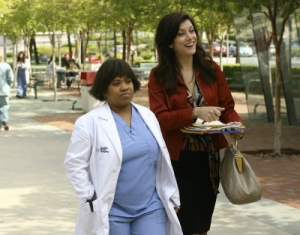 “What the heck are you so smiley about?”

To boycott on Bailey’s behalf, I urge you all refuse to watch Private Practice.  Wait . . . we already do that . . .