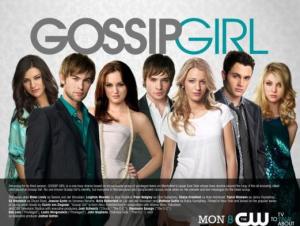 Spotted: The most unintentionally relevant episode title EVER . . .

After all, there is no way the Gossip Girl writers could have possibly known, back when the script for this episode was being written, that a similarly titled film would go on to take home Best Picture, Best Director, and Best Original Screenplay awards at the Oscars, all by way of major upsets . . .

“I can see the future!  Now that’s what I’m TALKIN’ ABOUT, Willis!”

Tonight, we welcomed back our Upper East Side friends after a three-month hiatus.  Upon our return, we were treated to an episode about “taking things slow”  — an episode that, while not without its inherent sexiness and heartwarming moments, was . . . a little . . .  slow.

“Which one are you again?”

I wouldn’t mind so much, if the character just admitted to herself and the audience what she really is: a slut.  After all, there is nothing wrong with being a slut, per se.  Some of the greatest characters in television history were sluts!  For example, there was:

Blanche Dubois, from The Golden Girls;

Kelly Bundy, from Married with Children; and

Samantha Jones, from Sex in the City.

When the episode opens, Serena is on the phone with Blair, all hearts and roses about reuniting with Nate, after his time away from the city on vacation.  Blair cautions her friend about letting the “kitty out of the designer hand bag” too fast, if you catch my drift . . .

“Get your mind out of the gutter!  I was being literal!”

Blair urges Serena to take things slow, and play a little hard to get, so as to keep her blossoming relationship from going stale too quickly.  Unfortunately, Serena has about as much experience taking things slow, as she has with adding double digit numbers . . .

“Why bother learning to add when your boyfriends can do it for you?”

Serena is all set to disregard her friends sage advice, and head off to the Ambassadors Ball with her Beau- of-the-Week, when Nate, who has received similar “take it slow” advice from his buddy, Dan (Why anyone would take advice from HIM is beyond me!), disinvites Serena from the exclusive event.  Unaccustomed to being unceremoniously dumped, a pissed off Serena seeks revenge by asking a former beau from her “bad girl” boarding school days, Damien (more on him later), to be her escort to the ball.  A jealous Nate, who initially planned on attending the ball solo, ends up taking young Jenny Humphrey (more on her later too).

Now, I know I’ve just bashed the heck out of this storyline.  But I must say, these two were pretty hot together in that coat room.  No one ever said sex had to be smart to sell . . .

Let me be the first to say, I like Jenny’s new beau, Drug Dealing Damien.  For starters, he bears an uncanny resemblance to Jared Leto, circa the mid 90s.

“Praise the Lord!  Jordan Catalano has been reincarnated, and returned to MY so-called life!”

Plus, I am always a sucker for a bad boy.  Up until this point, Chuck Bass more or less had the market cornered on redeemable bad assery on Gossip Girl.  And yet, as the series progressed, Chuck became increasingly well-behaved, leaving somewhat of a void in the series.

While no one can match Ed Westwick’s deliciously deviant sexiness as Chuck, Kevin Zeger’s Damien follows in his footsteps quite nicely.  And I must say, even though Zegers looks a tad long in the tooth to be in a relationship with little Jenny, he and Taylor Momsen have good on-screen chemistry, something the actress never had with Chace Crawford’s Nate, in my opinion.

When the episode opens, Damien presents Jenny with a problem to solve.  You see, Damien has this gift box filled with expensive prescription medication and assorted designer drugs.  He needs to get these drugs to the daughter of the French Ambassador at Ambassador’s Ball, without getting narc-ed out by government security.

Jenny, who is nothing if not resourceful, comes up with the “brilliant” idea of stitching the drugs into an item of clothing.  Suddenly, I am wondering whether I have inadvertently changed the channel, and stumbled upon a rather ill-conceived episode of Project Runway.

“This week, your challenge is to fashion a wearable garment made entirely out of pharmaceuticals.  Make it work, Designers!”

Although I loved Jenny’s idea in theory, her execution was a little off.  That pill-studded cropped jacket was the ugliest thing I have ever seen!  In addition to being completely grotesque, the jacket was also more than a tad dated, with its 80s era “bedazzled” pill sequins and high shoulder pads.

The original plan is for Jenny to wear the pill-filled jacket to the event, and switch it with the French Ambassador’s “sober” version of the jacket during the party.  The problem is that Damien, upon recalling what a whore Serena was back in boarding school, jumps at the chance to attend the party with her, instead of Jenny.

At the ball, Damien has little trouble getting Serena into the ugly jacket, but finds himself in the unique situation of being unable to get her out of it.  Now, when even Serena Van der Woodsen won’t sleep with you, that’s pretty bad!

With enough “I told you so’s” to buy a jacket that’s actually fashionable, Jenny ultimately comes to Damien’s rescue.  Finding the pilly jacket on the floor in the coat room (Serena and Nate tossed it there during their hard-core screwing session), Jenny instructs the coat check girl to make sure that its delivered immediately to its proper owner, the French Ambassador’s daughter.

Something tells me Little J’s foray into drug dealing will not be quite so easy the next time around . . .

Of course, my favorite storyline of the evening came from my favorite Gossip Girl couple, the always-intriguing and never dull, Chuck and Blair.  Every time these two are on screen with one another, I feel like I need to take a cold shower.  Unlike Serena and Nate, Chuck and Blair don’t need to be screwing to be sexy, the looks they give one another say it all . . .

I’ll admit that when the episode opened with Blair babbling about needing Chuck’s help to convince some snooty French dude to approve her charter for a “secret society” at NYU, I was a bit concerned.  How many episodes are going to revolve around Blair plotting to get herself into some pompous club or event?  Foruntately, Blair’s popularity “crisis” quickly took a back seat to Chuck’s identity one.

If you recall, Chuck was told by his father that his mother died giving birth to him.  As if that wasn’t enough of a guilty burden for a young man to shoulder, Chuck was always convinced that his father held him personally accountable for his mother’s death.

Prior to the show’s Season 3 hiatus, when Chuck visited his father’s grave on the anniversary of the latter’s death, he found a woman there, equipped with his father’s favorite flowers(?) (must be a “rich guy” thing), and a locket with his father’s picture in it.  Said locket just so happened to be engraved with his mother’s first initial “E”.  Understandably, Chuck became obsessed with finding this woman.

Initially, young Bass’s pride kept him from admitting to Blair that he was investigating the source of the locket and its female wearer.  Yet, Blair, in a move that was surprisingly mature and altruistic for her often immature and self-absorbed character, recognized her boyfriend’s pain, and put aside her petty secret society bids, in order to accompany Chuck on his mission to find the owner of the locket.

When Chuck finds the woman, she denies being or knowing Chuck’s mother, despite the fact that her name also begins with an “E.”  The woman claims that the locket was something Papa Bass gave to all of his sexual conquests.  A heartbroken Chuck leaves the scene, but Blair stays behind.  In a speech that was both beautifully written and beautifully acted by Leighton Meester, Blair explains to the woman that she doesn’t buy her story.  She tells the locket owner that if she knows anything that can relieve Chuck’s guilt over his mother’s death, she owes it to Chuck to share that information.

Later a dejected Chuck comes to grips with the fact that he will probably never have a mother.  Blair gently comforts him, promising him that she will always be his family.  With Blair by his side, Chuck will never have to be alone.  What well-adjusted adults these two have become — quite a long way from the scheming and conniving Blair and Chuck of Season 1 (who I’ll admit, I miss a little bit).

Still, I’m proud of these two.

At the end of the episode, we see the Locket Woman staring at yet another locket, this one containing a picture of her holding a baby.  With Blair’s poweful words fresh on her mind, the woman finally musters up the courage to contact Chuck on his cell phone, using a Blocked number.

“What do you expect from a guy with a dog’s name?”

Tune in next week, when Serena and Nate are sure to have more steamy sex, the heretofore absent Vanessa will likely make an appearance (zzzzz), and, hopefully, there will be plenty more Chuck/Blair scenes and Damien bad assery to drool over . . .