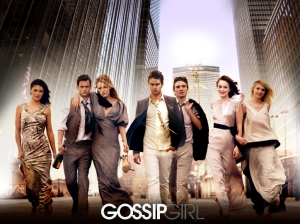 You’ve really gotta hand it to Gossip Girl.  Even when the show seems like it’s being a hypocrite, it can surprise you, by proving that it is not afraid to call itself out on its own BS . . .

Of course, I am referring to the moment when the unabashedly sluttiest teen drama on television suddenly became all morally aghast, when its youngest cast member contemplated offering her V card to a slightly older man (Slightly older being 19, mind you).

19!  He’s practically got one foot in the grave, already!

But as I said, our fave nighttime soap is nothing, if not self-aware.  And our Upper East Side sexpots more than redeemed themselves by the episode’s end.  Sure, “The Sixteen-Year Old Virgin” ‘s plot twists were a tad on the predictable side (I guessed two out of three within the first ten minutes.)  But that didn’t make it any less fun to watch . . .

So, without further adieu, let’s strap on our Jimmy Choo’s, sneak out of Daddy’s house, and get ready to get de-flowered . . .

Get thee to a nunnery, go!

Contrary to what I might have thought upon viewing the conclusion of last week’s episode, Jenny did not , in fact, run away from home to shack up with Drug Dealing Damien / Poor Man’s Jared Leto.

Instead, she obediently followed her father to Brooklyn.  But all was not as it seemed . . .   After “good” Little J kissed her Daddy goodbye, and headed off to school, she (gasp!) REMOVED HER PONYTAIL!

So, of course, Jenny cuts class and heads off to La Casa de Drug Dealing Damien.  It only takes a few seconds of half-hearted necking, before Ole’ Horndog rears his ugly head (no pun intended).  “When I date someone, sex is usually part of the equation,” explains Jordan Catalano Damien, matter-of-factly.

(Yes, Damien.  Because discussions about mathematical formulas are always such a tremendous turn-on for us girls.)

After some more subtle-as-a machine gun hints from the Suave Big D, Little J agrees to do the deed with him that night after school.  Stop me if you’ve heard THIS one before . . .

Unfortunately, for our Craptastic Cassanova, Big Daddy Rufus has grown wise to Jenny’s cutting class to canoodle with Sir F*cks A Lot.  So, like any Proud Papa, Rufus rallies the troops for a rescue mission.  Jenny’s Big Brother, Dull Ass Dan, can give two sh&ts about what, or who, his little sister is doing.  After all, he’s too busy contemplating whether or not to “go public” regarding the most boring relationship in television history . . .

Just looking at these two puts me to sleep . . .

Sidenote: If you recall, Nate lost his virginity at age 16 to Serena, as shown in flashbacks of the event (and in those now-famous promotional posters for the show), which were said to occur months prior to the show’s first episode.

Although not explicitly stated, it is implied that Serena lost hers MUCH earlier . . .

A photograph of Serena Van Der Woodsen and her first “serious” boyfriend . . .

Fortunately, Serena has an ingenious (and by “ingenious” I mean “mind-blowingly” dumb) plan to rescue Jenny’s Flower from Drug Dealing Damien’s evil clutches.  The plan involves Serena seducing Damien and Nate coordinating it so that Jenny will catch him in the act.

(Don’t you love how Serena’s schemes always seem to involve her getting naked?  If I recall, her equally “ingenious” plan to get her absentee father to notice her also involved her slutting it up with random guys.)

Damien, however, proved himself to be smarter than I thought he was, and didn’t fall for Serena’s not-so-nefarious plan.  But Nate takes matters into his own hands, by calling in the Daddy Squad.

Have no fear, Deputy Killjoy is here!

Rufus returns Jenny to the high-security prison that is his Brooklyn apartment.  There Dumbass Dan finally wakes up from his Vanessa-filled stupor long enough to tell Jenny not to “do it” with Damien, because she is only 16.  “When you were 16, you were in love with Serena, and everybody thought it was adorable,” retorts Jenny.

Later, Serena berates Nate for not trusting her “ingenious” plan and for calling Rufus.  Nate responds that he had to prevent Jenny from screwing at all costs, because she is just so darn cute and innocent at 16.  “Not like me, who was such a major slut at 16!”  Serena seethes.

Hey, would you look at that shoe your wearing!  It fits!

Nate then proceeds to detail all of the people Serena had been rumored to have screwed prior to age 16.  Serena tells him not to believe EVERYTHING he hears, but doesn’t exactly deny having been sexually active prior to her encounter with Nate.

Need I remind you of this photograph ?

Nate later apologized to Serena for his faux pas, recalling how much he loved her, even at age 16, and how devastated he was by her sudden and abrupt post-coital disappearance.  He seemed sincere.  However, I couldn’t help but wonder whether Nate’s over-protectiveness of Jenny went just a bit beyond typical “brotherly concern.”  Watch out Serena, I smell a love triangle . . . AGAIN.

Although Rufus does a fairly good job of keeping Jenny locked up in her fairytale tower (where all the virgin princesses stay), the latter somehow manages to reunite with Drug Dealing Damien at the episode’s token hoity toity social event, a dedication of a museum wing to Chuck Bass’ Dead Dad. There, Drug Dealing Damien clocks Nate in his pretty boy face . . .

. . . and escapes with Jenny directly to his apartment and The Bedroom of Abandoned Flowers . . .

Another one bites the dust?

And just when it looks like Little J is about to become minus one Big V, Don Juan Damien makes some “seductive” comment about how sex is “no big deal.”  Seriously?  Could this guy be a bigger moron?  Jenny comes to her senses and escapes.  And her Flower lives to see another day, which is more than I can say for the rest of the cast . . .

Back on the Upper East Side, in Chuck and Blairville . . .

Chuck is bonding with his “Mommy Dearest.”

Unfortunately, her complete inability to emote, and her monotone delivery of every single line she utters, proves her to have graduated from the Ben Stein School of Acting . . .

Unfortunately, Chuck is too preoccupied to notice his “mother’s” clear lack of a personality and soul.  After all, he is facing a boatload of sexual harrassment charges made against him by patrons of the hotel he owns.  Blair impresses me yet again, by not believing this hogwash for even a moment.  The timing of these law suits just seems a tad too convenient, coming right on the heels of the dedication of a museum wing to the late Bart Bass.  The couple’s suspicions appear to be confirmed when Chuck’s Uncle Jack returns to the scene with designs on Chuck’s hotel.

Perhaps to illustrate that his loss of Bass Industries’ to Lily Bass has left him destitute and desperate, the Elder Bass now sports a ridiculous mountain man-esque moustache and beard.  Uncle Jack confronts Chuck and causes him to doubt the veracity of Mamma Bass’s claims of maternity.  Chuck grows even more suspicious of Mommy(?), when she backs out of the museum dedication party upon hearing that Uncle Jack will be there.

Despite Blair’s protests, Chuck orders a DNA test to ascertain whether Mamma Bass is truly his Mommy.  However, when he is discussing the matter with Blair, Lady Bass overhears him.  With a stiff, heavily Botoxed face, we have to assume is “very hurt and angry,”  she (boredly) stalks off.  Chuck decides to have the DNA test done anyway . . .

Later, Chuck’s Creepy Lawyer, who also appears to have attended the Ben Stein School of Acting with Mamma Bass . . .

What can I say?  We have a great financial aid package . . .

. . . informs Chuck that the ONLY way out of this scandal is to give up the hotel temporarily to another member of the family, until things die down.  Already, my BS meter is going off the charts.  Come on, Chuck!  Bad actors just can’t be trusted!

Of course, Evil Jack Bass is waiting in the wings to take over the hotel.  But “fortunately” Chuck has another option.  You see, the DNA test Chuck ordered proved Mommy- Can’t-Act-For-Crap Bass is, in fact, related to him.  So, Chuck promptly turns over the hotel to HER, to apologize for doubting her parentage.  Mommy Bass accepts . . .

In the final moments of the episode, in a plot twist, that, by now, should surprise, precisely NO ONE we learn that Creepy Lawyer, EVIL Uncle Mountain Man, and Mama Bass are in cohoots . . .

In other, really dull news, Dan and Vanessa have decided to go public as a couple.  In other, less dull, and slightly surprising news: (1) Lily and Rufus have reconciled; (2) Rufus never slept with that trampy neighbor lady; (3)  and Lily may have been seeing Bily Baldwin  . . .

Dr. Van Der Woodsen, NOT to screw his brains out, as we once thought, but to seek treatment for her OWN, as of yet, unknown medical condition.

So, in conclusion, Mamma Bass is an Ass.  And neither Little J, nor Drug Dealing Damien, nor Rufus, nor Lily are getting any loving . . .

Until next week, XOXO!