Make Room for Daddy (and Jenny) : A Recap of Gossip Girl’s “Dr. Estrangeloved” 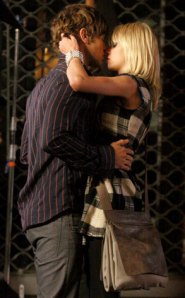 Greetings, Upper East Siders!  Tonight’s GG installment touted the return of many things us fans may or may not have been missing from Seasons past: (1) a wasted, shaggy-haired, self-destructive, and generally D-baggy Chuck . . .

. . . and (3) a formerly absentee daddy, who kind of, sort of,  makes a pass at his own biological daughter

Let’s revisit, shall we?

So, apparently, while Serena has been MIA searching for her not-so-proud papa, Jenny and Nate have been getting mighty chummy.  She’s been crashing at his place, sleeping in his bed (He sleeps on the couch), and supposedly wearing his shirt . . .

OK, GG Fashion Department, this is where I call BS.  That shirt Jenny was wearing?  HUGE . . . Nate?

Not so much (still cute though).  The pair was also  involved in some SERIOUS Wii Tennis Tourneys.  And can I just say, if that game is anywhere near as sexy as Chuck described it here (sweaty bodies touching, grunts, groans, and sexual tension galore), I would hereby like to officially add a Wii to my Birthday Wish List . . .

Anyway, Serena texts Nate to let him know she’s back home. So, our boy promptly ditches Little J’s ass.  She sulks unattractively, convinced all hope is lost.  However, EEEVVVIL (and hot) Chuck encourages Jenny to use Serena’s return to her advantage, by trying to drive a wedge between the happy couple.  Why did Chuck suggest this you ask?  Well, if you recall, last week Blair dumped his butt.  So, now he’s miserable, and wants everyone else to be miserable too . . . And nothing could make a person more miserable than dating Little J . . .

Jenny takes Chuck’s advice, stealing Nate’s shirt (which conveniently has his last name etched in the back – His maid must have done that, because we all KNOW Mama Archibald doesn’t sew!).  Jenny then “accidentally” pulls the shirt out of her purse, when she runs into Serena later that day.  Jenny’s evil plan seems to work, because Nate and Serena quickly start bickering over the shirt, as well as Serena’s recent MIA-ness.

“I was washing my hair.  Not like Little J!  Her weave is probably waterproof!”

Having so much success the last time, Little J takes Chuck’s advice again by “dressing like someone who doesn’t have a mother” (which she sort of doesn’t), when she accompanies Nate and Chuck to a party in Brooklyn. (Yes, boys and girls, our Upper East Siders actually LEFT the Upper East Side this week  . . . and went somewhere other than the Hamptons.)

When Serena calls Nate on his cell phone, Jenny sparks her ire again, by approaching Nate and — loudly enough so that Serena can hear — suggesting he do shots with her . . .

“Drink these, Nate.  They will lower your standards, and make you forget that I am UNDERAGE!”

When Serena rips Nate a new one over the phone for being out with Little J, Nate gets pissed, and decides he wants to “go back to the apartment and get wasted.”  (Smooth move Nate!  Because liquor and heartbreak always mix SOOO WELL!)  Of course, Jenny goes tromping off after him.  Back at the apartment, Nate is bitching to Little J about Serena.  And Little J takes up the bashing in full force, telling Nate that he deserves better, and that SHE would never treat him that way.  Jenny then pulls Nate in for a kiss, which he rebuffs. And Serena arrives at the apartment, just in time to see the WHOLE THING!

Nate and Serena begin to duke it out, and, through their fighting, they figure out that Jenny orchestrated this whole mess. So, Nate kicks Little J to the curb . . .

Why was Serena all “MIA” from Nate’s life during this episode, you ask?  Well, it turns out she was dealing with family issues.  If you recall, last week, when Serena went to her biological father’s apartment, she found her mother there . . .

Apparently, all this time, Serena’s father has been treating Serena’s mother for cancer.  The pair had temporarily cut ties with their entire family, to keep this a secret from them (which, I’m sorry, seems really weird and unrealistic – I don’t blame Rufus for being skeptical).  Papa van der Woodsen arrives in the Upper East Side to break the news to everyone.  He claims that Lily is in remission now (that was fast!), but he would like to rekindle a relationship with his daughter . . .

OK, here’s the thing . . . I always REALLY liked Billy Baldwin.  In my opinion, he was the hottest Baldwin brother (Alec was the funniest, Stephen was the most religious, Daniel is . . . nevermind).  I even liked him as the sexy sociopathic voyeur in that bizarre Sharon Stone movie, Sliver . . .

And for a middle-aged dude, he still looks pretty good.  My issue here, I think, is with how Billy chose to play this particular role. I’d read in a recent Entertainment Weekly interview with Mr. Baldwin, that he was kind of offended that GG cast him as Serena’s dad.  After all, in the past, he always played the boyfriend of girls like Serena.

You know what?  It totally showed.  When Billy asked Serena out to a local restaurant “to chat,”  and, later, when he said to her “let’s get out of here” and have some “banana splits,”  his line deliveries were much more in the vein of a creepy old guy hitting on a teenager, than of an absentee dad trying to reconnect with his daughter.  It totally grossed me out.

Later that evening, the van der Woodsens have yet another family meeting.  It turns out that Lily’s cancer is not  in remission after all.  So Papa van der Woodsen is going to have to stick around for a while.  But is Papa a Big Fat Liar?  His cryptic conversation with a shady pharmacist, at the end of the episode (not to mention next week’s promos), seem to suggest that he is . . .

The Tale of the Relationship Fatwa . . . 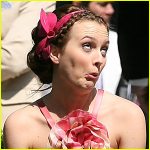 Poor Blair!  Recently single and in complete denial of her breakup pain, all she wanted to do was have a hot revenge makeout session with an eligible bachelor.  But EEVVILL Chuck had other plans for her.  When Blair arranges a party with a dozen eligible bachelors from the Upper East Side, not one of them shows up.  Blair knows the reason instantly.  “You put a Relationship Fatwa on me,” she whines to Chuck.

“I did NOT put a Relationship Fatwa on you,” argues Chuck.  “It’s just that no one can measure up to what we had, and I’m not the only one who knows it.” 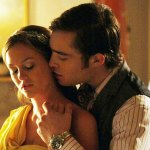 (For what it’s worth, I kind of liked the “no one can measure up” line.  I thought it was kind of sweet in a D-bag Chuck way.  But, apparently, he’s used it in past breakups with Blair.  Because when I searched for the quote on Google to try and nail down his exact phasing, I found the same words in recaps for other episodes.  Way to be original, Gossip Girl!)

Anyway, recycled lines aside, Chuck was LYING!  He totally put a Relationship Fatwa on Blair!  He confirms this when he learns Blair is heading to a party in Brooklyn (the same one Jenny and Nate attended). Chuck immediately decides to go to the party, in order to extend the Fatwa across all Five Borroughs!

At the Brooklyn party, Blair flirts with a student from Columbia (which, if I recall, is where Blair now goes to school, although they seemed to brush over that fact during this episode.  Wouldn’t it have made sense for her to tell this boy that she recently transferred to his college?).  The Ivy League Co-ed is clearly smarter than he looks, because he immediately picks up on all of the glares Blair is throwing in Chuck’s direction.  He tells Blair that he is more than willing to play along, and make out with her, to make Chuck jealous.  But Blair declines.

As Blair explains to Chuck at the end of the episode, she needs to properly grieve over the loss of their relationship, before she can make out with random dudes.  “When I kiss another boy, I want it to be for Me,” she explains.  (Boo, hiss Blair!  Don’t you know, you aren’t supposed to be the mature one on this show?  What happened to the bratty, whining, scheming, and 12-year old acting Blair of yesteryear?)

Gossip Girl‘s most boring couple got only slightly more interesting this week, when they both screwed one another over.  You see, apparently, NYU — where, in real life, approximately 20,000 undergraduates are matriculating at any given time — in GG world, has the WORLD’S SMALLEST WRITING PROGRAM EVER – one that only admits ONE PERSON every year.   Riiiight!  Talk about a poorly constructed plot device.  And yet, if it drives a wedge in the middle of this snoozy couple, I say, “Bring it on!”

Anyway, Sleazy Liar Vanessa decided to apply to the program AGAINST Dan, and NOT TELL HIM she was doing it.  And even though the character has NEVER EVER shown ANY interest in writing AT ALL!  She gets in over him.  When Dan finds out, he initially tries to be supportive.  But I’ve faked happy for a friend I was jealous of before, and I know what it looks like . . .

Fortunately for Dan, the daughter of the Dean of Admissions at Tisch REALLY wants to get in his pants.  So when Dan lets it slip to HER that Vanessa’s application piece might not have been entirely original (He thinks she based it on a short story Dan once wrote), the ho-bag quickly runs to rat Vanessa out to Daddy.  The only problem is . . . Vanessa DID submit an original story, one based on her relationship with Dan (that must have been ONE BORING ASS STORY!)  So, of course, Vanessa finds out what Dan did, and she is PISSED!

Well, that’s all folks!  Tune in next week, when we will most definitely get to see a lot more of this Creepo . . .

. . .Tighten up that chastity belt, Serena.  You’re gonna need it!