True Blood Minisode 4 – Sam and All His “Tools”

It’s TUESDAY!  And you know what that means, fellow fangbangers!  It’s time for HBO to on purpose accidentally leak its most recent minisode from the Drop of True Blood series!  Just in case you haven’t already guessed, based on the title of this post, or the above poster, this one stars Bon Temps’ favorite shape shifter, Sam Merlotte (played by the adorable Sam Trammell).  And when I say stars, I really mean it, because he is literally the only “human” that appears during the entire 2:37 running time!  Oh, and did I mention he takes off his shirt? 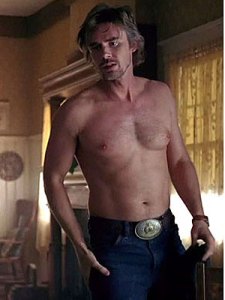 It looks like something you’d win at a WWF wrestling match.

I have to say, this one might be my favorite minisode so far.  Admittedly, I sort of giggled uncomfortably for the first two minutes, wondering where exactly they were going with this.  (The OVERLY dramatic background music didn’t help.)  But the payoff at the end sold it for me in a BIG way . . .

Let’s roll the clip, shall we?

(Special thanks go out to ShirtlessLocke for posting this!)

BTW, if you’ve missed any of the previous True Blood minisodes, you can find direct links to them all here. (Links to the first and second minisodes are at the bottom of that post.)