Glee’s Noah “Puck” Puckerman – Yet Another Addition to My Ever-Growing List of Current Television Boyfriends . . .

Wednesday nights are currently television-lite for me.  I don’t have any shows to recap, which saddens me a bit (but probably improves upon my ever-dwindling sleep schedule – Recaps take a LONG time to write!).  It also causes me to get a bit nostalgic for a time, not too long ago, when Wednesday night television, literally rocked!  Of course, I am talking about one of my favorite new shows of last year – GLEE!.

This cheese-tastic, 80’s and 90’s loving, musical powerhouse graced my television set, every Wednesday night, from May through November of 2009.  It took only one episode, for me to become a total “Gleek”.  During those fun-filled prime time hours, it wouldn’t be at all unusual to find me bopping around the apartment like a drunk girl at a bar, singing at the top of my lungs, or clapping and hooting when the first bars of songs I recognized were played on screen.  After the first season finale aired, my typical television withdrawal-fueled depression was tempered, only by the fact that I now have EVERY song ever aired on the show in high rotation on my iPod.

Musical obsessions aside, one of the major draws of the show, for me, anyway, came by way of a certain mohawk-wearing, bad boy jock, with the body of an Adonis, and a last name that sounds like a kiss. 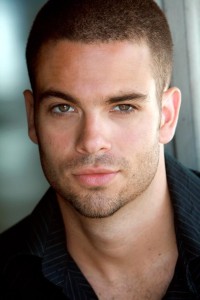 Here are 10 reasons, that I have decided to elevate Noah “Puck” Puckerman to fake boyfriend status:

(1) Mohawk Man: Puck sports a hairstyle that went out of style around the time that I was born.  But he makes it look GOOD!

(2) Varsity Boy: Puck is a total, card-carrying, jock.  This  means, as his faux-girlfriend, I get to wear his slightly oversized varsity jacket, when we go out on dates . . .

(Personal sidenote – Back in high school, I was on the track team, and actually had my own varsity jacket.  This didn’t stop me from secretly hoping that the right high school athlete would let me wear his . . . )

(3) Underdog: Puck spent most of the first season on the unrequited end of a love triangle.  In my book, brooding men, who want what they can’t have, are a total turn on . . .

(4) Father Figure:  Rather than run away screaming (as many lesser men would do), Puck has shown that he’s willing to step up the plate and help Quinn to raise their baby.  He even raised money to help her to pay for her medical bills.  So what, if that meant getting all the kiddies high, by selling them pot brownies?

If I even have to explain this to you, you have no business reading this blog . . .

(6) Shalom Sayer:  Puck is Jewish.  And it is high time that television portrayed Abraham’s people as something more than math geeks and mama’s boys . . .

Say what?  You didn’t know Jews were cool?  Have all 80 installments of my Hanukah song taught you nothing?

(7) Non-Perv Maker: Sure, Puck is only in high school.  But the actor who plays him, Mark Salling, is a twenty-something, like me.  This makes me feel WAY less guilty for drooling over him.  The fact that he and I could date in real life, without me (a)  being mistaken for his mother; or (b) being charged with a crime, is a definite selling point for our make-believe relationship.

(8) Renaissance Man: Puck plays three different sports at the varsity level, cleans pools, bakes brownies,  sexts like a champ, sings AND plays guitar.  Is there anything this guy CAN’T do?

Glee returns to Fox on Tuesday, April 13th.  Watch with me.  But keep your mitts off Puck, OK?  He’s MINE!