I’m not going to say that the The Sopranos finale was the first time I heard about or listened to the band, Journey, but it was pretty darn close.  Just in case you were curious, THIS is Journey . . .

Is it just me, or does the one on the far right bear a striking resemblance to Sue Sylvester?

Yet, now, between that controversial fade-to-black “Tony Soprano loves onion rings.  Let’s listen to Don’t Stop Believing, before we sort of, kind of, quite possibly die” series finale, and Glee‘s Journey extravaganza at Regionals, the aforementioned 80’s hairband has officially become the Lords of the Primetime Finale!  And having watched this season’s final episode of Glee (appropriately entitled “Journey”), I can certainly see why . . .

The episode began with a SHOCKING revelation!

Well . . . at least . . . it would have been shocking, if it wasn’t revealed during the episode promos.  You see, the winner of the Regional Glee Club competition was to be decided by a panel of four “celebrity judges.”  (Why four?  Wouldn’t it make more sense to have an ODD number of judges, in the event of a tiebreaker?)

WHO is the fourth judge, you ask?  None other than THIS lovely lady . . .

. . . who, seemingly, hates the Glee kids’ little singing and dancing butts.  This, of course, complicates matters, seeing as, Glee must “place” at Regionals, in order to retain school funding for their club.

Understandably, hearing that news bums out our Glee kids, who have already spent a majority of the second half of this season bummed out about something or other.  Lucky for Quinn, she gets to escape to Hot Porno Flashback land — specifically, the time when she and a still Mohawk-ed Puck did the nasty in her bedroom, while she was drunk on wine coolers.  Of course, she was still wearing her cheerleading uniform at the time.  Obviously, Quinn is too young to remember Monica Lewinsky, and the important life lesson she taught us, back in the day: “Sex acts are for the NAKED ONLY.  Clothes just get in the way, and, eventually get you into trouble.” 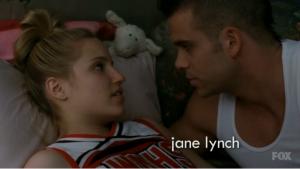 “I did NOT have sexual relations with that cheerleader!”

While the Glee kids are at Mr. Schuester’s house for pizza, they all cry about how much they will miss Glee club, once it’s gone.  Will tries to keep his composure during the meeting, for the kids’ sake.  However, later, while driving alone in his car, Will hears “Don’t Stop Believing,” and can no longer fight his emotions.    Kudos to Matthew Morrison for making this scene raw and real, and not feeling the need to “cry pretty.”  Because, let me tell you, for a cute guy, that was some UGLY ASS crying  . . .

“I don’t understand, he was eating onion rings, and everything was FINE!  Then it just ENDED, without explanation!  If only Meadow Soprano was better at parallel parking, things might have been different!

Upon witnessing this heartfelt, teary scene, I couldn’t help but be reminded of ANOTHER male actor, who is also highly adept at UGLY CRY FACE . . . 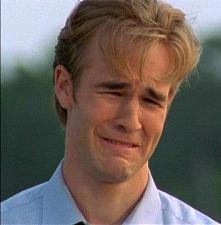 “I wish they played Journey music, when Joey Potter dumped ME.  It would have helped to ease my pain!”

Then, because it’s the season finale, and ALL Would-Be Couples must make out in the season finale they truly believe they can lead the Glee Club to greatness, Finn and Rachel decide to makeout in the middle of the high school hallway.

Just moments later, having been energized and inspired by his Ugly Face Cry, Mr. Schuester informs the kids that they will be doing a Journey medley at Regionals . . .  because the “journey is more important than the destination,” or something like that.  We all know how insufferably cheesy Mr. Schue can get, when it’s time for him to reveal the “Lesson of the Day.” 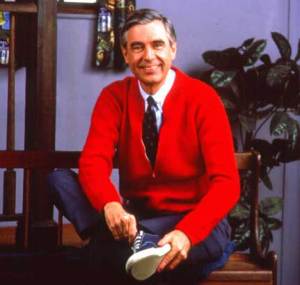 As promised, at the Regionals competition, OUR Glee group, New Directions, sings a Journey medley containing, three songs: “Faithfully,” “Anyway You Want It,” and, of course, the song that first made this show legendary, “Don’t Stop Believing.”  The entire performance was phenomenal, and certainly exceeded all of MY expectations.  Even Finn’s awkward dancing was slightly less irksome tonight.  (Props to the script writers for not-so-subtly pointing out how VERY BAD he actually is.)  Oh, and you know who FINALLY got a solo?  THIS Guy . . .

I know, I know.  That was a totally lame excuse to include a Shirtless Mark Salling pic in this recap.  But, COME ON, this is my last opportunity to do this ALL SUMMER!  You can’t honestly blame me for trying to make the best of it.

Immediately, after New Directions finishes its performance, Quinn’s estranged mother approaches her, and tells her VERY pregnant daughter that she wants her back in her life. 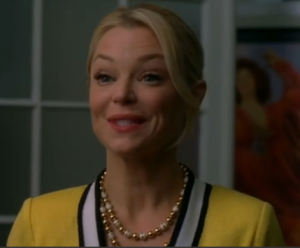 I would love to say that Mama Fabray’s “change of heart” came from a completely unselfish place.  However, I imagine it had a lot to do with the fact that Daddy Fabray ran off with some “tattooed freak.” 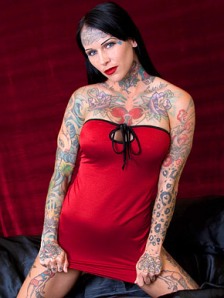 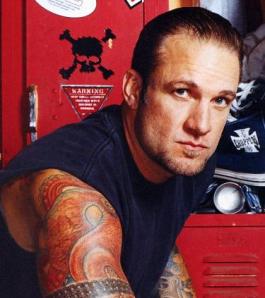 Speaking of Jesse James, or, rather, Jesse St. James, while Quinn is being rushed off to the hospital to give birth (her water breaks, while she is reuniting with her mother),  Jesse and his EVIL crew, Vocal Adrenaline, perform their medley of songs by Queen.  We actually only get to hear “Bohemian Rhapsody.”  However, we can assume that, at some point, the group performed “Another One Bites the Dust,” also by Queen, seeing as we heard that one in last week’s episode.  Personally, I would have preferred to see this uptight bunch rock out to “Fat Bottomed Girls”  . . . but that’s just me.

I realize that Jonathan Groff is supposed to be this “big time” Broadway star, so I’m going to chalk this up to his interpretation of the “Jesse” character.  However, it must be said that this dude makes some truly WEIRD and PISSED OFF faces, when he sings and dances . . .

“Bohemian Rhapsody” is a notoriously LONG song, that has about a MILLION different parts to it.  However, either Vocal Adrenaline are the World’s Slowest Singers, or Quinn gave birth to Mutant Speedy Pop Out Baby (It would certainly explain Quinn’s rapidly expanding, decreasing, and expanding again waistline).  Because, while Vocal Adrenaline was singing, New Directions had time to:

(1) drive Quinn to the hospital;

(2) watch her go into labor and give birth;

(3) complete all the legal paper work necessary to process an impromptu adoption (more on that later);

(4) drive back to the competition in perfect hair and makeup; and

(5) be ready and waiting on stage for the award announcements.

But I’m getting a bit ahead of myself here.  You see, the writers brilliantly (or disturbingly, depending on how you feel about these sort of things) juxtaposed Quinn’s giving birth . . .

“They’ve only been singing for about two minutes.  You have PLENTY of time to give me an epidural!”

. . . with Vocal Adrenaline’s preformance of “Bohemian Rhapsody.”  So when Quinn gave birth to Baby Beth . . .

. . . which left me wondering, which Vocal Adrenaline star was lucky enough to play the “afterbirth?”

Speaking of that heartless witch of a Vocal Adrenaline coach, Shelby Corcoran, Rachel approaches her biological mom after the competition, and suggests she “team coach” New Directions with Will.  But Shelby HATES the idea.  She wants to have a NEW KID, so she has absolutely NO TIME to waste on her VERY VERY OLD ONE.  So, of course, Quinn and Puck HAVE to give Shelby their kid, because screwing up ONE childhood, is clearly not enough for this broad!

“I’ll get you my Quinney!  And your Baby Beth too!”

Meanwhile, Sue Sylvester and her panel of “celebrity” judges . . .

.  . . duke it out amongst themselves to determine who should win Regionals.  Surprisingly, Sue keeps her mouth shut through most of the deliberations, except to deflect some insults thrown her way by the other judges, Olivia Newton John, Josh Groban, and that random news guy from one of the early episodes, Rod Remmington.  And when Sue Sylvester is the NICEST one in the room, you know you’ve got a pretty unlikeable bunch.    The other three judges seem split exactly down the middle, with Olivia Newton John preferring the porn-name sounding “Aural Intensity,” who performed a cover of one of her songs, Rod enjoying Jesse and his Vocal Adrenaline kids, and Josh seeming to prefer OUR New Directions kids.

Soon after deliberations are complete, we learn that New Directions finished THIRD in the competition, with Vocal Adrenaline bringing in the win.  Of course, the kids are crushed, believing their Glee club dreams are finished . . . 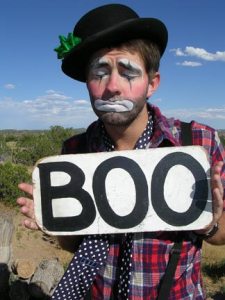 Back at school, Will finds ex-girlfriend Emma (now dating a dentist) screaming at Principal Figgins about his decision to disband Glee club.  (Not that Principal F has made ANY decisions this year, without someone’s hand up his ass, making his mouth move . . . I’ve seen slugs with more gumption than this guy!)  Will sees this exchange, and apparently finds it SUPER HOT, because he promptly tells Emma he loves her, and makes out with her because that’s what ALL Would-Be Couples do during season finales he really cares.

His mouth still wet from Emma’s super sanitized spit, Will enters the school auditorium to find his entire Glee club sitting before him.  In a scene that ACTUALLY had ME crying, the kids tell Will how much he has meant to them as a teacher.  They further explain that, even if there is no more Glee Club, Will’s lessons will always be in their hearts. The crew then sing “To Sir With Love.” And, by the time, they are finished, there is truly not a dry eye in the house. 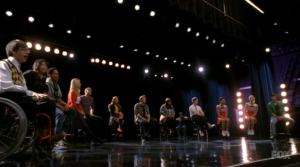 Not even the eyes of Sue Sylvester!

Through flashbacks, we find out that, in a surprising show of decency, Sue HAD actually voted for New Directions to win at Regionals (which makes it all the more confusing that they LOST, especially considering that (1) Josh Groban also seemed to be on board with them winning; and (2) the other two judges each had a different favorite candidate.)

Feeling a bit guilty about the loss of New Directions, Sue strong-arms Principal Figgins (see what I mean about the hand up the butt?) into reinstating Glee club for ANOTHER YEAR!

Upon hearing the good news, Will decides to call a temporary truce with Sue!

Take note, Middle East!  If THEY can do it, so can YOU!

Will is so happy, he sings “Somewhere Over the Rainbow” with Puck, which was touching and sweet, if not exactly “manly.”

“Hey, Puck!  When we’re done here, do you wanna go shopping with me?  There are these ruby red slippers at the new mall that I’ve just been DYING to try on.  It’s right up the yellow brick road . . .”

So, there you have it, folks.  Our first season of Glee has come and gone, and a long, hot Glee-less summer awaits.  Something tells me, I’m going to be singing to myself A LOT more in the coming months . . .

See ya next year, fellow Gleeks!