Fans of both Lost and The Vampire Diaries likely found a lot of similarities between this week’s TVD installment and that other show trickling across the airwaves right now.  And I’m not just talking about how both shows feature Ian Somerhalder playing a ” hot dead guy” . . . 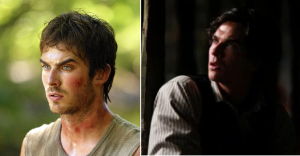 Like that “other show,” “Blood Brothers” split its time between the present day and a flashback this week, in order to: (1) further develop the characters featured in the flashback; (2) explain these characters’ actions and motivations; and (3) provide viewers with additional insight into the show’s “mysteries.”  In addition to being profoundly Lost-ian . . .

. . . this week’s episode, also featured: some truly sexy moments (way to go Jeremy and Anna!), some shockingly disturbing moments (Stefan ate his dad?), a vampiric re-death (R.I.P. Vampire Pearl), a vampiric rebirth (Hi, Isobel!), and, if you were really looking hard for it (like I was), some yummy grist for the Damon and Elena shipper mill . . .

Let’s bite into the episode, shall we?

When we last left our pal Stefan, he was acting like a total human bloodaholic, and, in Damon’s words, “going around chewing on people.”

Before you chew on me, Stefan, may I interest you in a nice stick of gum, instead?

And so, with the help of Damon and Elena (It has such a nice ring to it, don’t you think?), Stefan met up with the business end of a vervain-filled syringe, and ended up locked up in a sort of jail cell, conveniently located right inside the Salvatores’ La Casa de Rich and Awesome.  (You know, if I ever make it big enough to buy myself a mansion, I am TOTALLY putting some sort of cage in it . . . )

Because CAGES are SUPER KINKY!

Anyway, being “locked up” and all, Stefan suddenly has a lot of time to think.  So, he flashes back to the time in his life when he and Damon first became vampires.  This is great news for us fans, because we FINALLY get to learn how it all went down . . .

When we last left Flashback World, the Mystic Falls townspeople were in the process of forcibly gathering up all of the town’s vampires, in order to stuff them in a church and burn them to smithereens.  The mob is being led by none other than Damon’s and Stefan’s father, who uses the information he learned from Stefan, himself, to get to Katherine.  This is a very RUDE thing of Daddy Salvatore to do, putting a muzzle on a woman with whom you used to play croquet . . . 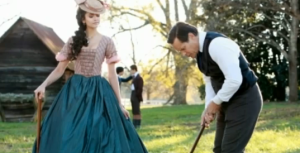 When Katherine is captured, Damon and Stefan band together to come to her rescue.  While they are attempting to untie and unmuzzle her, two gun shots are fired in rapid succession off-screen, one landing in each of the Salvatore brothers’ chests.  As the brothers’ lie on the ground, bloody and unconscious, Katherine is dragged away by the angry townspeople.

A few days later, Stefan and Damon wake up in a secluded area.  There, they are promptly informed by Witch Emily . . .

. . . that because both brothers drank Katherine’s blood (Damon, by choice, and Stefan, by compulsion) prior to being killed, they are now in transition toward becoming vampires.  The catch?  In order to fully transform into vampires, they need to drink . . .

Initially, both Stefan and Damon agree that, without Katherine, there is no reason for eternal life. So, they must allow themselves to die, rather than complete the transition.  However, on a whim, Stefan decides to go to his father’s house to wish him goodbye.  Once there, his father informs Stefan that HE WAS THE ONE WHO SHOT THEM!!!!!  This bastard shot his own sons, because he didn’t like the girl they were dating?  Overreact much?

To make matters worse, Daddy Salvatore seems intent to finish the job.  He rushes at Stefan, clutching a large stake-like poker in his hands.  But Stefan, who has already gained some of his legendary vampire strength from those legendary (and hot) vampire arms of his . . .

. . . stabs his DAD with the poker instead.  And while Stefan’s Daddy is moaning, groaning, and basically dying in front of him, Stefan begins to EAT HIM (well . . . drink his blood, at least).  The scene is NASTY!  I mean, sure, Daddy Salvatore was a TOTAL PRICK, no question.  But drinking the guy who gave you life, is kind of like drinking yourself .  . .

Stefan returns to Damon, all crazy-eyed and red-haired (not sure when present day Stefan found time in his busy “chewing on people” schedule to get a dye job, but, apparently, he did).  Trailing behind Stefan is a teenage girl, clearly under compulsion.  Stefan tells Damon that they were wrong.  That there is no need to die, not when drinking blood can “take away the pain” of life and “open up whole new worlds” for the Salvatore brothers.  Initially, Damon seems repulsed by his younger brother’s behavior, and hesitant to make the transition.  But, ultimately, his vampire urges take hold of him, and he sucks on (and very likely kills) the teenage girl.

After Damon returns from his “snack,” he angrily vows to make Stefan’s life hell on earth for all eternity.  And, in hindsight, we know that, for a good portion of his undeath, Damon did just that . . .

You just KNEW I’d find SOME WAY to use this picture again, in my recap, didn’t you?

So, I’ve got good news and bad news.  Which news do you want first?  The good news?  OK.  Jeremy and Anna?  They are a SUPER HOT COUPLE!  And if their sort-of sex scene and post-coital cuddle wasn’t all of two-seconds long, I would have TOTALLY shown you a Shirtless Jeremy pic from it.  The actor who plays him (Steven R. McQueen) is, after all, 21-years old . . . 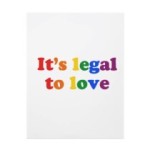 In addition to being HOT, Jeremy and Anna were also really sweet together.  Between Anna’s willingness to stand up to her mother, and revisit the slings and arrows of high school, just to spend time with Jeremy; and Jeremy’s sleepy whisper of “Oh, that feels so good,” when Anna lovingly rubbed his face, as the two laid in bed together, I instantly became a Team Jeranna fan!

. . . was bludgeoned by a crossbow, shot at her from long range, and instantly killed!  Who killed her, you ask?  Presumably, this CREEPO . . .

. . . Uncle John (I HATE THIS GUY!), who realized he no longer had any use for Pearl, upon learning that she had given his ancestor’s Magic Vampire Killer Thingy (that nobody knows how to use yet) to Damon.  Just one question:  What happened to Hottie Vampire Harper?

Vampire Pearl’s loyal associate was standing right next to Vampire Anna when she was bludgeoned, but has not been seen or heard from since . . .

Damon and Alaric – The Bromance Continues . . .

This week, Alaric calls his new buddy Damon (LOVE these two together!) to check out a lead he had on the possible whereabouts of his previously-thought-to-be-dead-but-actually-a-vampire wife, Isobel.  Damon immediately agrees to come along.  And although I know that Damon was the one responsible for turning Isobel, my Damon and Elena shipper sense tells me, that Damon went on this “little journey” with the secret hope of helping Elena to find her long lost biological mother.  After all, Alaric’s “ex” and Elena’s “mom” are one in the same person.

“Damon Salvatore is currently out kicking some Serious Vampire Ass for the woman he secretly loves . . . Leave a message.”

When Damon and Alaric arrive at the house initially thought to contain Isobel . . .

. . . she’s not there.  However, some random Hidey Hole Vamp is!  (And WE thought they were GONE FOR GOOD!)  Upon learning that Random Vampire Henry is somehow connected to Creepy Uncle John, Alaric and Damon KILL HIS BLOODY BUTT for good!  Congratulations to Vampire Henry for winning the Senseless Death Award for the week!  Here’s your trophy . . .

Teacher (as Damon lovingly calls Alaric) is getting surprisingly good at murdering folks, now, isn’t he?  Once the deed is done, the two engage in a heartwarming personal conversation about the struggles of pining over the “one who got away.”  “Two years pining over the woman who left you, is remarkably healthy, I think,” remarks Damon, self-deprecatingly, having mooned over Vampire Katherine for way over a century now.

Although the two pals end their little road trip empty handed, in the last scene of the episode, Isobel comes out of hiding and confronts Alaric at the local bar.  Seeing as how next week’s episode is entitled “Isobel,” I’m pretty sure we haven’t seen the last of this chick . . .

The Will to Live (and to wear sexy white tees that show of your KILLER arms) . . .

When Stefan wasn’t flashing back to his past, he spent most of the episode, brooding, refusing to drink blood, and flexing those drool-worthy pectoral muscles of his.  Elena, who has been basically living at La Casa de Rich and Awesome with both Salvatores for a few days now  . . . (Threesome anyone?) . . . continually tries to get through to Stefan, and break him out of his funk.  At one point, she even goes as far as to enter the “lion’s den” with the hungry vampire, putting her life at risk.  But Stefan, feeling incredibly guilty for his recent behavior, and for the part he played in making Damon become a vampire, wants to die, as he feels he should have done all those years ago.  During the episode’s climax, Stefan escapes his cage, leaving his “I can be in sunlight without rotting” ring on the floor by his prison cot.  His plan, of course, is to meet the sun and die at dawn.

“I put up with your crap for 20 episodes, and all I get for it is this UGLY ASS RING?   You could have at least got me something from Tiffany’s . . .”

Having recently heard Stefan’s flashback tale of woe from Damon (BTW E and D have been sharing adorably snarky barbs and smirks with one another ALL NIGHT . . . just saying), Elena instantly knows she can find Stefan at the very spot where he got Damon to eat that teen way back when.  Elena explains to Stefan that she too is no stranger to guilt.   After all, she was the reason her parents were out driving on the night they were both killed in the car accident.  Elena explains to Stefan that she knows he is “good,” and that, together, they can beat his human blood addiction.  Ultimately, Stefan puts back on that UGLY ASS RING, and the two kiss and make up.

With Stefan back to being the “good brother” and Damon’s alone time with Elena over, it is now Damon’s turn to brood.  In the last scene featuring the sexy Salvatore brothers, Damon admits that the REAL reason he hates Stefan is because Katherine chose to “turn” Stefan too.  And now, it seems, once again, that the two brothers are in love with the same girl . . .

Filed under The Vampire Diaries