My Favorite Mobsters: My Picks of the Top Ten “Made Men” to Grace the Silver and Small Screen

Why are we so fascinated by mobsters?  Is it the way they talk?  (“Fuhgeddaboutit!”  “I’m gonna make him an  offer he can’t refuse!”  “Go to the mattresses.” “I amuse you?  I make you laugh?”)  Their funny accents?  Those snazzy suits and hats they always wear?

Or perhaps it’s something deeper.  After all, mafia men are loyal to a fault.  They adhere to a strict code of honor.  They place the institution of  “family” above all else.  If you really think about it, mobsters were the first, and ultimate, “bad boys.”  The most successful ones are powerful, strong,  sexy . . . and deadly dangerous.

So, without further adieu, here’s my list of the Top Ten Fictional Mobsters of all time . . .

Show of origin:  The Simpsons

Fat Tony is a successful amalgamation of pretty much every movie and television mobster ever invented.  But he still manages to have his own unique style.  It’s really hard to be intimidating when you are drawn in colored pencil, and have a face like a muppet.  Yet, Fat Tony somehow manages to be genuinely menacing.  Interestingly enough, the character’s appearance is based on that of an actor who frequently appears in mafia films (and was just shy of making this list).

Paul Sorvino (Now can you see the resemblance?)

9) Sonny – The Mobster with a Heart of Gold

Film of origin:  A Bronx Tale

Sure, Sonny may have shot a man in cold blood over a parking space, but it was really to protect Joe Pesci!  And, yes,  Sonny beat the stuffing out of an entire biker gang, but they had been destroying family-owned bars across the country!  When you really think about it, this New York mob boss was a pretty good guy, as far as racketeering murderers go.  And he seemed to really care about young Calogero (“C”).

Sonny acted as a second father to C (His biological father was played by Robert De Niro, who is also on this list, TWICE.  However, not for this movie, where he played a law-abiding bus driver.)  He taught C the ins and outs of life, lectured him about staying in school, gave him advice on women, tried to keep him away from a life of crime, and, most importantly, saved his life.  Oh, and he also taught him how to gamble.  Gambling is fun!

Film of origin: The Godfather (Parts I and II)

Not all mobsters were Italian.  Some were of German and Irish descent, like Tom Hagen.  (Can’t you tell by the name?)  Tom was an educated man, a lawyer.  He acted as a sage, and mild-mannered advisor, first to Vito Corleone, and, later to his son, Michael.  Despite, living and working amongst mobsters, Tom more or less managed to keep his hands clean.  And while he remained loyal to The Family throughout his life, he did so without ever committing an act of violence.  (Then again, he did convince that one guy to commit suicide.  Not cool, Tom!) 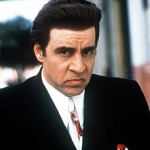 Show of origin:  The Sopranos

Oh how, I love Sylvio, let me count the ways.  First and foremost, he has cool Elvis hair.

And the actor who plays him rocks out with a band from my home state of NEW JERSEY!  Bruce Springsteen’s E-Street Band, of course!

Silvio was probably the toughest muscle of Tony Soprano’s gang.  However,  unlike the hot-headed Paulie Walnuts (we’ll get to him later), he never lost his cool.  When others came to doubt Tony’s leadership, Sylvio was unfailingly loyal.  Sylvio detested rats above all else, and most of his victims were snitches and informants of some sort.  (And no one likes THEM, anyway, right?)

Like Tom Hagen, Jimmy is an Irish mobster (although, truthfully, it’s hard to imagine De Niro as anything other than Italian).   And like Silvio, he is the mild-mannered muscle of his crew.  Although, Jimmy’s origin of descent prevented him from becoming a true “made man,” he never complained.  While his hands may have been dirtier than anyone else’s in his Family, Jimmy never let his job diminish his sense of class and style.  A

fter a big score had left them with untold riches, Jimmy cautioned his crew against dressing and behaving too ostentatiously.  Oh yeah, and the dude can smoke a cigar like no one’s business . . .

Film of origin: The Godfather (Parts I and II)

Honestly, how could I make a mobster list, without including the original mobster himself?  Vito was the King of the Mobsters.  The mobster on which all subsequent film and television mobsters are undoubtedly based.  And if his character didn’t have to go and die on us at the end of the first Godfather movie (we saw him in the second one only through flashbacks), I have no doubt that he would be significantly higher on this list.

Show of origin: The Sopranos

In short, Paulie made this list because he is bat sh*t crazy!  If Silvio is the man on the Soprano’s crew you’d most want to have your back, Paulie is the one you’d most want to take out for beers.  Between his kick ass one-liners, his random flip outs, and his childlike constant need for approval, hot-headed Paulie Walnuts is nothing if not entertaining.  And talk about loyalty to family, the dude beat up an old lady, just because she wasn’t playing nicely with his mother!  Plus, he has awesome Pepe Le Pew hair . . .

Played by: Joe Pesci (Here’s another guy that I couldn’t dream of making a Mob Hit List without!)

I’m pretty sure, a lot of what is awesome about Paulie Walnuts was inspired by this guy.  Tommy DeVito was a hotheaded sociopath, who loved killing and beating the crap out of people. In fact, he did it regularly, often for NO REASON AT ALL.  Murderous tendencies aside, he seems like a pretty cool guy to spend an evening with.  Just don’t call him funny . . .

Film of origin: The Godfather (Parts I, II and III)

Do you even have to ask?  Michael Corleone was the quintessential mob boss.  But what made him so interesting and unique was that he never wanted to be one.  Born into a notorious crime family, Michael escaped his roots at the age of 18, and went on to become an Ivy League graduate, and war hero.  He then married the straight-laced daughter of a Baptist minister, in hopes of becoming a law-abiding family man, with a lowercase “f.”

But Michael soon gets sucked into the Family’s web.  When two nearly successful attempts are made on his father’s life, he is forced to avenge them.  After his father’s death, Michael is forced to replace him as head of the Corleone crime family.

Although throughout the trilogy, Michael makes numerous attempts to legitamize the Family business, he is continually thwarted by circumstances beyond his control, as well as his growing greed and hubris.  Of all our mob men’s stories, his is perhaps the most tragic.  And that’s why we love him.

Show of origin: The Sopranos

There are those of you out there who would undoubtedly like to give me flack for placing Tony Soprano above Michael Corleone on this list.  However, I have had eight years to get to know the former, and only a few hours to get to know the latter.  So, you will have to forgive me my sacrilege.

Tony Soprano remains one of the most complex characters in television history.  On one hand, he is a hardened criminal, a violent and cold-blooded killer — a man who regularly cheats on his wife, who betrays his former friends and members of his family.  Sure, you could probably justify his murder of Tony Blundetto as a mercy killing, a rival family was going to do him in, anyway.

And his murder of Adrianna could be called a “protective measure.”  She was going to turn Tony and the rest of the Soprano family over to the FBI.

But his shocking “hands-on” murder of protégé and adoptive nephew Christopher Moltisanti during the show’s final season?

On the other hand, Tony Soprano was always somewhat of a flawed every-man.  He tried desperately to be a good dad to his two children, a good brother to his younger sister, and a good son to his spiteful, mean, and often unappreciative mother.  And before he killed Christopher, he really did care for him like a son or younger brother (if that counts for anything).  Tony also suffered from debilitating depression and panic attacks, both of which made him seem more fragile and human.

It was these physical and emotional ailments that caused Tony to seek treatment from psychiatrist Dr. Melfi.  During these therapy sessions,  we got to see a softer side of Tony — a side that experienced guilt and remorse over his actions, one that loved and deeply cared about those around him.

Dr. Melfi brought out the best in Tony Soprano.  And even though, these two never crossed the line romantically, the intelligent interplay and sexual tension between them was extremely HOT!

This is why Tony Soprano, tops my list.  And why, I REFUSE to believe that he died during that maddening fade-to-black series finale!  In fact, I am so certain, that Tony merely finished his onion rings, waited until Journey’s Don’t Stop Believing finished playing on the juke box, and drove home, that I’ve decided to leave you with a video of the awesome opening credits to one of the best television series of all time.

After all, these credits show a living, cigar-smoking Tony Soprano commuting home from work on the New Jersey Turnpike.  And that’s what I truly believe he will be doing tomorrow evening . . . at least in TV Land!