“This above all: to thine own self be true.”

In Shakespeare’s Hamlet, Polonius said these iconic words to his son Laertes on the eve of the latter’s trip to Paris to warn him not to go slutting it up with the local Parisian lassies while on holiday. He could be a bit uptight sometimes, that Polonius.

Nowadays, these words are commonly evoked to mean something a bit less . . . celibate. They are about self-acceptance, self-love, self-understanding, and all that other mushy gushy “self” stuff. They are about embracing your flaws and weaknesses with as much passion as you do your strengths and gifts. These words are Dr. Phil: Twitter Edition, basically.

Coincidentally, this famous phrase also just so happens to be the theme of this week’s Super-Sized Edition of Once Upon a Time. Love yourself . . .

. . . even if you have a habit of shooting firebolts out of you fingertips, which occasionally turn your son into a human rocket launcher . . .

. . . or you are an Evil Queen with a penchant for boning married dudes in mausoleums . . .

“Hey, anyone got a tissue? Or an ice scraper?”

. . . or you have a delusion that two women who look and are young enough to be your daughters are actually your “sisters” . . .

Love yourself, in spite of all these things, or better yet, because of them.

Because, if you don’t, you can be sure as hell that nobody else will . . .

Let’s review, shall we?

To check out the rest of this jumbo-sized, snarktastic recap, click here.

In a season that’s been all about snow monsters, people who shoot ice out of their fingers, and women who accidentally/on purpose get turned into popsicles, “The Snow Queen” was a nice, refreshing, change of pace. Why, you ask? Because this was an hour of television that brought the heat, in more ways than one . . .

Now, unless you own an ice cream shop or a ski lodge, or just find the refrigerator in your home to be a huge waste of space, the ability to shoot icicles from your finger is pretty much one of the least useful super powers ever.

You can check out the rest of the recap here.

Sorry Brunettes, Gingers, Silver Foxes, and Raven-Haired Beauties! This week on Once, if your hair is not the color of sunshine, Tweety Bird or scrambled eggs, this woman wants you dead . . . like yesterday.

“Is it too late to invest in some bleach?”

Elsewhere in Fairytale Land, Belle did a pretty crappy thing to Anna for a pebble and an even crappier thing to Rumpelstiltskin for a hat box.

“Oh Rumple! I just had this horrible nightmare in which I acted like a total asshole for an entire episode . . . oh, you mean that wasn’t a dream? Crap!”

And Hook? Well, he didn’t do very much at all, save looking sexy and making some wry comments about how gosh darn incestuous Storybrooke has become . . .

So hug your favorite Rock Troll and steer clear of evil mirrors that talk too much, because it’s time for another Once Upon a Time Recap . . .

(You can check out the rest of this recap here.)

Filed under ABC, Once Upon a Time

“Hey, anyone got a tissue?  Or an ice scraper?”

What does it take to gain your trust?  Are you someone who is easily won over?  All it takes is a pretty face, a warm smile or a few moments of bonding over a sweet treat, and you are already convinced you’ve met a friend for life. 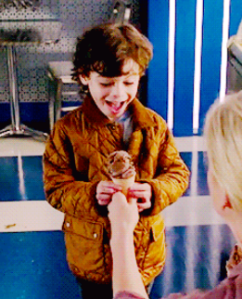 Do you tend to give people the “benefit of the doubt,” and view them in the best light possible, until they prove to be otherwise?

Or perhaps you are a bit more discerning in the people with whom you choose to share your secrets?  You often find yourself skeptical of the motives of others.  You play your cards close to your chest.  Those who don’t know you well may even call you aloof, standoffish, or, dare I say . . . frosty .  . .

Though one could argue that the theme of every episode so far of Season 4 of Once has been “how to milk the Frozen franchise for all its worth,” I would argue that this particular episode . . .

For people like Elsa and Emma, who have been hurt and mistreated in their past, it is difficult to open up and trust others .  . .

For people like Regina, Rumpelstiltskin and Will Scarlet, who have been stereotyped and marginalized for their past deeds, it is difficult to regain the trust of the people who may have already written them off.

And for people like the Snow Queen, this general lack of trust amongst the good people of Storybrooke proves to be a fertile playground for manipulation, control, and all sorts of other activities that tend to frequent the To Do Lists of every self-respecting Big Bad.

Let’s review, shall we?

A Little Background on The Snow Queen

What’s fun about Once Upon a Time, is that most of the fairytale characters we meet here are fairly recognizable to pretty much anyone who has ever read a fairytale or  . .  . more likely . . . seen a Disney movie based on a Fairytale.  Most of us grew up knowing at least the basic stories of Snow White, Beauty and the Beast, The Little Mermaid, Little Red Riding Hood.

But Once seems to have waded a bit deeper into the Fairytale Pool for The Snow Queen, a story that probably didn’t make a lot of your first grade teachers’ Must Read list . .  . basically because its super dark, and a little gross . . .

You see, The Snow Queen’s modus operandi was basically to shove broken pieces of glass mirrors into people’s eyes (ouch!) and distort their vision of the world.  She’d make them hate everything and mistrust everyone except for . . . wait for it . . . The Snow Queen herself.

This was a step-by-step process. First she’d make her victims act like total douchebags to all their friends.  Then, when they had no friends left, she’d have them come live with her.  Then she’d make out with them (even if they happened to be little prepubescent boys . . . ewwwww), causing them to not only mistrust and hate their former friends, but to forget their existence entirely.

In short, The Snow Queen was the “If I can’t have you, no one can,” abusive boyfriend / mistress in every Lifetime Movie you ever saw . . . 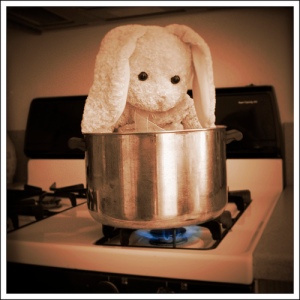 A burner of bunnies . . . among other things.

(You can read the rest of my recap for Once Upon a Time’s Rocky Road here . . .)