Welcome back, Gleeks!  Can you believe it’s been a month since the last time Sue tried to destroy Glee club . . . 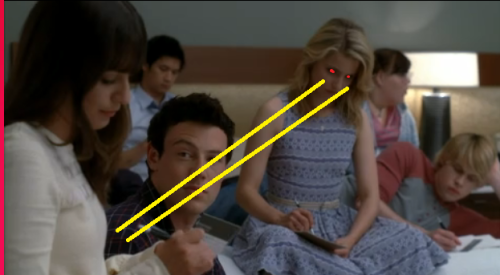 . . . or Blaine sang a song by Katy Perry, while wearing an item of clothing that you would laugh at on anybody else, but, on him, it looks surprisingly adorable?

“What the hell is on your head, fool?”

Well, it has been . . . But wait no more, because our New Directions crew is back in action!  And, this time, they have the Luck of the Irish on their side . . .

That’s right!  This week marked the debut of Glee Project winner, Damian McGinty, as Rory Flanagan, an Irish exchange student, who wears WAY too much green, loves Lucky Charms, and is desperately seeking a Pot of Gold inside Brittany’s pants.

In honor of his premiere episode, the character was granted: (1) not one, but two, solo numbers; (2) a truly awful hair style that only an Elvis impersonator could love . . .

(Enough hairspray to make the cast of the Jersey Shore cower in fear . . . ) 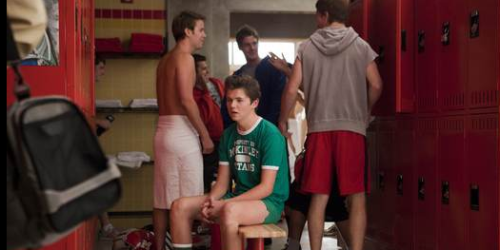 So, who cares that it’s still MONTHS away from St. Patty’s day!  Crack open your green beer, dress yourself up in four leaf clovers, and . . . yeah .  . . I can’t think of a third thing because it’s time to dig in to the “Pot O’Gold.”

How a Bunch of Corpses Saved West Side Story 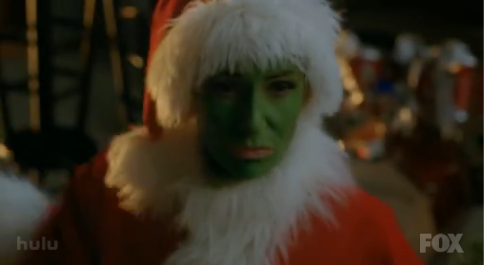 Surprise!  Sue is still using her national political campaign to try and screw over Glee club.  This time, she does it by attacking the school’s production of West Side Story, which, of course, stars ONLY Glee clubbers.  After getting McKinley High parents all riled up, by broadcasting the show’s $2,000 plus budget on the local news, she then incites them to lash out at Principal Figgins . . . kind of like this lady is doing .  . .

(This was my favorite part of the entire episode, by the way . . .  I have a feeling I will be using this GIF A LOT, in the future.) 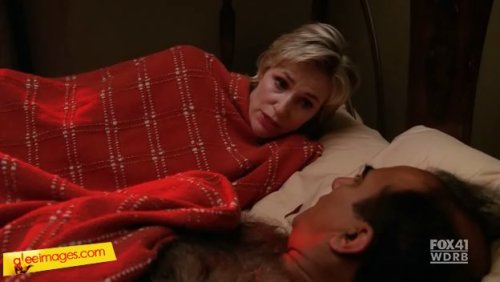 . . . New Directions soon finds itself without a school play . . . unless, of course, it can raise the $2,000 on its own.  Mister Schue suggests that the kiddies sell ad space in school publications to raise the missing funds.  “But WHO will buy the ads?” You might be asking yourself. 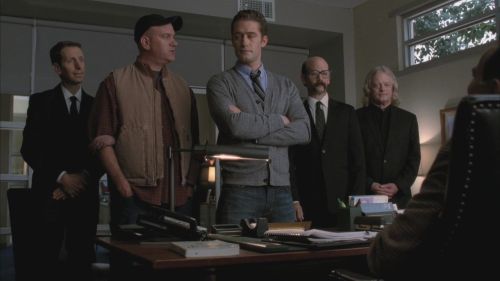 )This looks like an advertisement for the Hair Club for Men . . . )

These men decide to front the cost of West Side Story, because . . . well . . . a lot of characters die in the play.  So, basically, it’s like One Big Fat Funeral Home Commercial!

The aforementioned exchange (along with some nagging from Will) prompts Burt to enter the political arena, and challege Sue for the congressional seat, as a Pro Arts Candidate.  Of course, Burt appears on the  Sue’s precious local news program, to announce his “write-in” candidacy.  You GO, Burt!

Is that really Kurt’s dad?  I almost didn’t recognize him without the baseball cap . . .

Who are the dudes in the background?  Do they even go to this school?

In completely (and I mean completely) unrelated news, Blaine performs “Last Friday Night” with the rest of New Directions, while wearing an extremely dorky hat.

He does this to “unite” the Glee clubbers, after the untimely loss of Mercedes from Glee club, which has seriously dragged on the group’s spirits of late.  You know, because nothing brings teenagers together like stories of public intoxication and alcoholic blackouts . . .

Unfortunately, rather than bringing the group together (though most of them seem perfectly happy to rub up on one another, throughout the song), the musical number has the unintended consequence of making Finn jealous of Blaine (probably, because he could never pull off a hat like that) . . .

. . .  and Santana to become extremely annoyed at him (because she ALSO could never pull off a hat like that, but also because she assumes that Blaine and Rachel will now share all of New Directions’ solos, just as Rachel and Finn did, last year).

This prompts Santana to quit Glee club, and join Mercedes in Shelby Corcoran’s group, where the solos are a-plenty, and the members who pee standing up are a-zero.

But could Santana ever REALLY leave her lady love Brittany floundering all alone in an extra curricular activity, without her?   PERISH THE THOUGHT!

This reminds me .  . . did I mention that Santana and Brittany are “officially and item now?”  Because they are!  At some point during the hiatus, Santana and Brittany have apparently progressed in their relationship to eating shrimp cocktails together at Breadsticks (Santana pays, of course), and holding hands underneath napkins.

Even better is the fact that they leave little love notes / daily affirmations in eachother’s locker from their favorite pets . . . 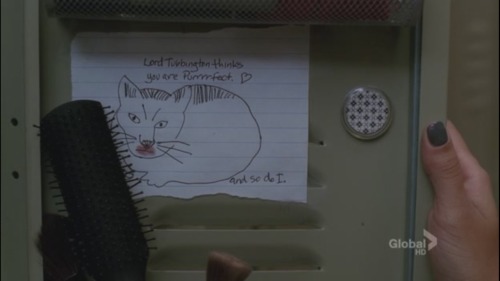 I hereby would like to start a campaign to nominate Lord Tubbington for an Emmy.  Who’s with me?

In Fox TV land, this is practically the equivalent of marriage . . .

New Irish Exchange Student, Rory Flanagan, wants to make friends . . . badly.  He figures that if he does, maybe he’ll stop getting pushed into lockers, every five seconds.  But, more importantly than that, Rory wants to get laid . . . by anyone, really . . . but specifically by Brittany, at who’s house he is currently staying. 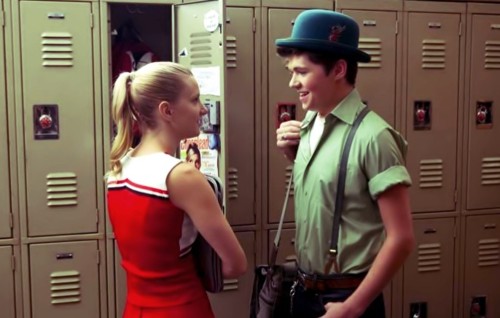 My goodness!  It’s yet another stupid hat.  Was there some kind of two for one special in the wardrobe department?

Fortunately, Brittany thinks Rory is a leprechaun.  And, apparently, she’s always really wanted to screw one of those  . . . which is kind of disturbing, actually.  (Then again, this is the girl who once created a campaign poster featuring Kurt Hummel being “ridden” by a unicorn.)

So, Brittany promises Rory that, if he grants her three wishes, she will show him her “pot of gold.”

“Does that mean what I think it means?”

Now, I suspect,  is supposed to mean her . . . um . . . Happy Place.  However, knowing Brittany, could actually just mean her favorite  . . . gold pot . . . or some really quality reefer.  Nonetheless, this is a risk Mr. Leprechaun is willing to take.  In fact, he even sings about it, performing a rendition of “It’s Not Easy Being Green.”

It was all right, I guess.  But I liked it better when THIS guy sang it.

Brittany’s first wish is to have a box of Lucky Charms made entirely of marshmallows . . . a wish that Rory the Leprechaun can grant easily enough, because . . . you know .  . . he and the Lucky Charms Leprechaun go WAY back. 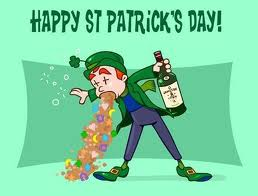 Her second wish is a bit more tricky.  She wants her pet cat to poop chocolate.  (Doesn’t everybody?)  Rory cleverly uses a bit of trickery (and some Baby Ruth bars) to satisfy this second wish.  And then he and Brittany “eat the poop” together.

Santana uses up Brittany’s third wish, to get her to quit the Glee club, and join Shelby Corcoran’s all-girl singing group, the Troubletones, which, up until this week, only featured Mercedes and the tone-deaf, Sugar.  However, it recently added the ever-fed up with her lack of solos, Santana to its roster.  Brittany is clearly upset with her girly girl’s choice of wish.

What really seals the deal though is Finn’s absolutely MORONIC attempt to get Brittany back onto New Directions, upon hearing from his new “friend,” Rory, what Santana has done.  “You are an idiot,” Finn tells Brittany.

Uh oh!  Finn, we all know what happened to ARTIE, when HE called Brittany stupid.

Once there,  Brittany and the rest of the group dress up like Old-Fashioned USO girls, and sing Christina Aquilera’s “Candyman.”  There performance is undoubtedly something the old hardass Vocal Adrenaline coach, Shelby Corcoran would have hated.  But, since Shelby is a mom now, who’s a bit more kind-hearted, when it comes to these things, she loves it.

Later,  when Finn comes to apologize to Brittany for calling her an idiot, Rory reminds Brittany that he has now granted HER three wishes, since Finn is now totally cool with her leaving New Directions.  Recognizing that Finn is not REALLY happy at all, and is just putting on a brave face, Brittany comes to the sudden realization that (horror of horrors) leprechauns aren’t real.

Ruh roh!  It looks like Rory’s days of digging through Brittany’s Pot of Gold are over, before they even started . . .

But hey!  At least now he can stop wearing green, switch to McKinley high’s token color, red, and . . . wait for it . . . join New Directions.

They even let him sing a song to welcome himself to the gang, “Take Care of Yourself.”  I thought it was just OK, but Rachel apparently thought it was “magical.” Go figure . . .

How to Quiet Your Baby (and satisfy your cougar)

Quinn commandeers Puck in her villainous plan to get Shelby to lose custody of Baby Beth, so that she can get her back, and have something else to look forward to in her future, aside from being really, really pretty for the next 15 to 20 years.

I mean, how exactly do you redeem a character from a horrible arc like this, aside from giving her a Life Altering / Brush with Death experience?  In other words, if I were Quinn I wouldn’t be (1) going to the doctor; (2) getting into a car; (3) or pretty much leaving the house at all for the rest of the season.  Just sayin’ . . .

The plan begins, cleverly enough, with Puck and Quinn buying Shelby some concealer, and subtly telling her she looks like crap, because she’s been spending too many late nights with the baby.  The pair then offer to babysit, and give her the night off.

Shelby complies, and, while she’s away, Quinn starts planting all this Bad for Baby crap in her house.  She doesn’t go so far as to get Beth taken away from Shelby, but not for lack of trying.  In fact, she even calls child services on the Glee club teacher’s ass, but they are conveniently “backlogged,” and can’t do anything about the alleged child abuse.  (Nice, right?)

Cut to Shelby getting Puck a pool cleaning gig, and Puck feeling super guilty about how he helped Quinn ruin Shelby.  So, Puck visits the teacher’s house to remove all the Bad for Baby Items planted therein.  Once he’s done with that, Puck and Shelby share a moment, over how terribly lonely being a single mother can be. *gag, snort, puke*  When Beth starts throwing a temper tantrum, Puck immediately makes her stop crying, by singing a bad 80’s song, “Waiting for a Girl Like You,” which he accompanies on his guitar.

Clearly, Beth has lousy taste in music . . . But, then again, so does Shelby, because she’s looking at Puck now, like she wants to swallow him whole.  Puck takes advantage of this “sure to help me get laid” moment, by grabbing Shelby’s hand,  looking deeply into her eyes, and telling her that he will be there for her, whenever she needs him . . . always.

Shelby must buy it, hook, line, and sinker, because, at the end of the episode, the pair makeout. 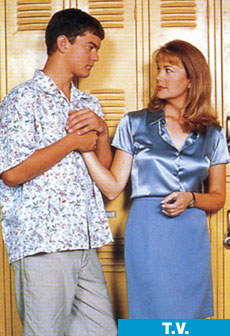 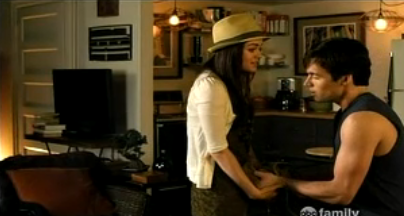 And that was “Pot O’Gold” in a nutshell.  So, tell me, my fellow Gleeks.  What did you think of the episode?  Are you already a Rory fan, or do you, like Santana, wish that he would just “do everybody a favor and disappear?”

Are you shipping Shelby and Puck?  Do you wish Lord Tubbington stopped smoking?  Are you digging the Troubletones?  And finally, where do you think I could get a ridiculous hat, like the one Blaine was wearing in his performance of “Last Friday Night?”

Speaking of Blaine, next week, it seems like he will cash in Kurt’s V-card, while Finn cashes in Rachel’s (though hopefully not at the same time, or in the same room, because that would just be weird).

You can check out the promo for The First Time,” here:

Until next time, Gleeks!