“I want to rub my face all over his face!” – The Lazy Recapper takes on Mad Men, Game of Thrones, Gossip Girl, Glee and New Girl

[Don’t worry, Fangbangers!  Your TVD-cap of “Heart of Darkness” is on its way, and will hopefully be posted sometime before midnight, E.S.T. Friday, April  20th.  I promise to make it worth the wait.  And even if it isn’t, at least all those Delena gifs will be pretty to look at!]

There was plenty to love in this week’s TV lineup: smart one-liners, shocking reveals, grown men engaged in fisti-cuffs, baby scares, illicit affairs, disco-dancing cross dressers, and even some chewing gum that got caught at the VERY WRONG PLACE at the VERY WRONG TIME.  So, of course, I wanted to “rub my face” all over all of it . . .

well . . . except for maybe the chewing gum (That’s just gross).

Let’s review shall we?

Game of Thrones – “What is Dead May Never Die”

This week on Game of Thrones, Tyrion Lannister once again illustrated his cunning and overall awesomeness, by marrying off his 10-year old niece Myrcella off to two different (both twenty years her senior) at the EXACT SAME TIME . . . 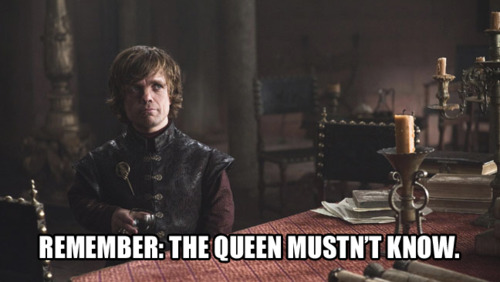 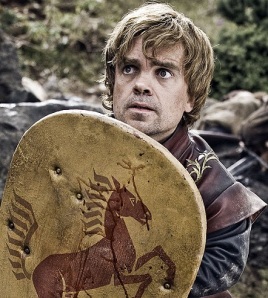 In other Tyrion news, DUDE, dump that Shae Wench.  And dump her fast.  Trust me on this one, little guy.  I’m only looking out for you . . .

Elsewhere in Westeros, we met Renly Baratheon’s wife, Margaery, who we learned is a real . . . umm . . . how do I put it nicely, “team player,” when it comes to carrying out the Commandment of “Honor thy Husband.”

She’s also VERY, VERY committed to her family.  (Perhaps, too committed?  Then again, isn’t everyone on this show.)

This week, we were also introduced to Brienne of Tarth, who just so happens to be my favorite character from the George M.M. Martin book series on which this show is based.  Brienne kicked her king’s boyfriend’s ass in a jousting match, and earned herself a spot on the Kingsguard, as her chosen reward.

Still, I admire the androgenous Brienne’s strength and moxie.  She should REALLY do something about that hair though . . .  It makes her look  like Macauley Culkin . . . 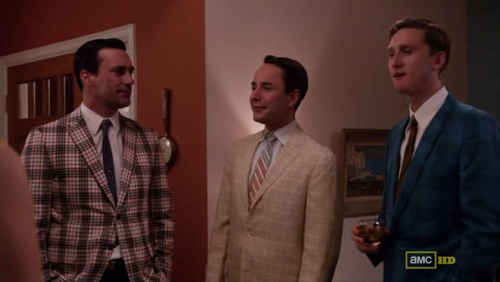 He took it off a few minutes later to “fix a broken sink,” but that damage had already been done.  Honestly, if I was a guy who looked like Don Draper, I’d probably never wear a shirt . . . EVER.  And a jacket?  Well, that’s as superfluous an item of clothing as this clown nose . . . 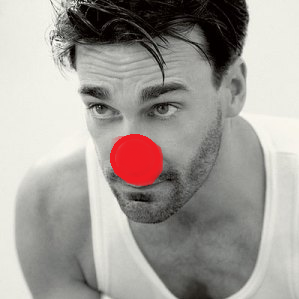 . . . particularly if it looks like it was made from someone’s picnic blanket . . .

And yet, this episode wasn’t really about Don and his questionable wardrobe choices.  It had a lot more to do with good ole Pete Campbell.

Pete had quite the busy week this week.  For starters, he went to driving school, and crashed and burned with a perky blonde high school chicky.  Dammit!  Who’s going to take Pete to the prom now?

Pete also got to wine and dine some British big wig from Jaguar (which Brits apparently pronounce as “Jag-oo-arrrr.”) 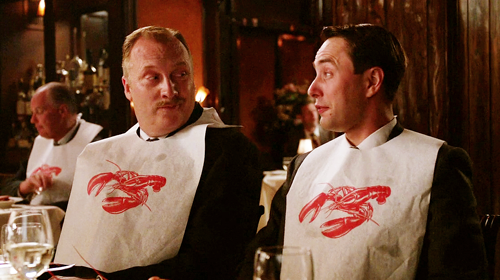 Helpful hint, Pete.  If you have to wear a big, while you are eating it . . . it’s probably not a classy meal.  You know what else isn’t classy?  Chewing gum on your dingaling . . .

Confused?  See . . . I forgot to mention that, after eating Baby Food with Bibs Pete and Mr. Jag-oo-arr traveled  to the Best Little Whore House in Manhattan, where Pete decided to role play a little Game of Thrones.  (He was Joffrey.) 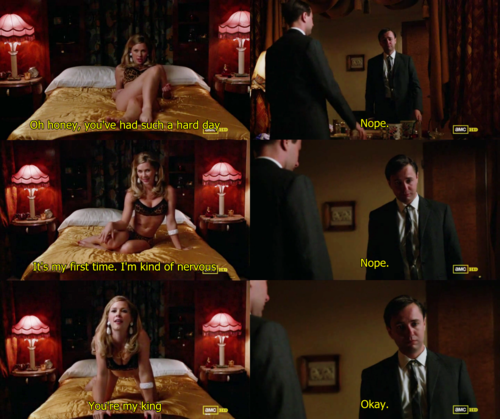 This may have seemed like good fun at the time.  But, ultimately, it resulted in SCDP losing the Jagooar account . . . thanks to Mr. Jagooar’s decision to get horizontal with one of those girls, who always leaves their chewing gum under chairs in public places  (I HATE people like that.), and clearly mistook Mr. Jagooar’s weiner schnitzel for one of those chairs.  Oops!

This business loss positively infuriate Lane, who had brought the account to SCDP in the first place.  A few harsh words were exchanged on both sides.  And, before you know it, this often stuffed shirted Madison Avenue advertising agency, had morphed into it’s very own version of Fight Club . . . with Lane playing the role of Tyler Durden as Brad Pitt, and Pete paying the much less lucky role of Tyler Durden as Ed Norton. 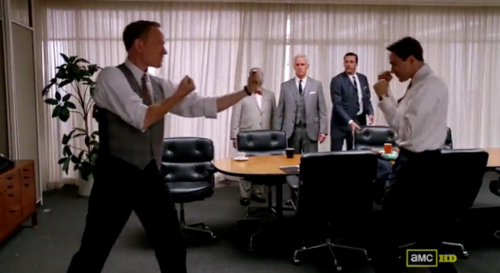 In other words, Pete got his ass handed to him, BIG TIME.

Let that be a lesson to you, folks.  Never mess with those Nerdy British types.  Not only are they surprisingly scrappy.  But most of them have never had chewing gum placed on their hot dog.  (They were much too busy beating people up in alleyways to concern themselves with such nonsense.) 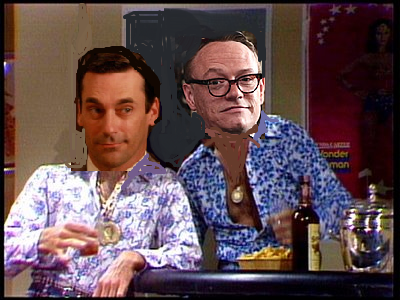 While Pete went home early to lick his wounds (or, perhaps, have his wife lick them for him) . . . 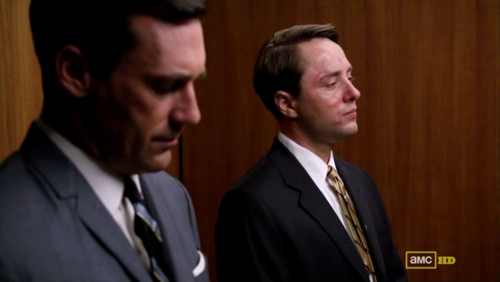 . . . Lane retired to his office, where he was promptly comforted by a newly maternal Joan.  “If they tried to make you feel different than them, you are.  And that’s a good thing,” she offered supportively.  Lane responded by doing this . . .

Well . . . at least it could have been awkward, if Joan idn’t handle the situation like a TOTAL boss.

Her face inscrutably blank, Joan quietly rose to open the door, thereby decidedly closing off the possibility for Kiss: THE SEQUEL.  But then she came right back to sit down next to Lane, silently reassuring him that this would not change their business relationship or their friendship, in the slightest.  Though I strongly suspect both parties will be looking at one another a bit differently from now on . . .

Joan even offered her “pal” Lane some parting humor.  “Plenty of people have wanted to do that to Pete Campbell,” Joan mused. 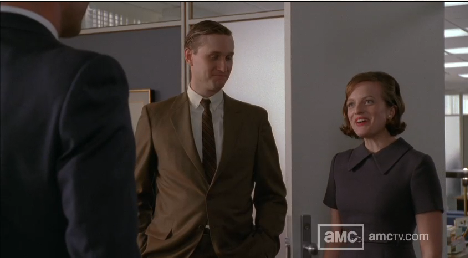 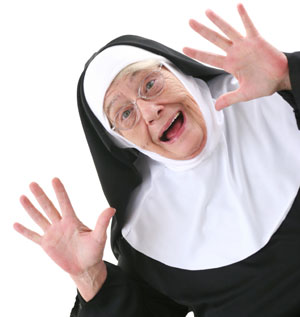 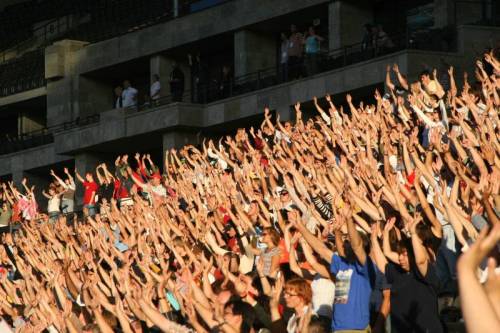 In other news, Ken Cosgrove is my spirit animal, because he’s a writer with a day job.  (In fact, he’s a much better writer than I am, if the excerpt from his short story at the end of this week’s episode is any indication.  I bet he doesn’t even NEED animated gifs as a substitute for real humor . . .) 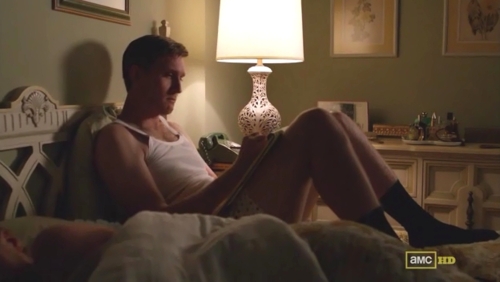 You keep writing, Ken!  Don’t let The Man get you down! 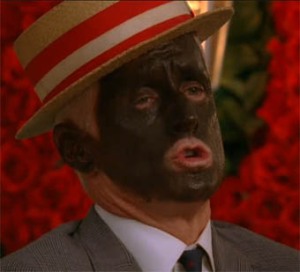 Roger Sterling a.k.a. The Man

Speaking of writers forced to use pen names to maintain their anonymity . . .

Gossip Girl – “Salon of the Dead”

This week on Gossip Girl, Serena was almost expose by Lola as the new titular GG .  . . but then he wasn’t.  Sorry, Lola!  The idea of S as Gossip Girl is apparently a tough sell.  After all, up until she graduated high school few people on the Upper East Side even knew she could read and write . . .

Poor Chuck!  Is there anyone on this show who hasn’t abandoned my Baby Bass? 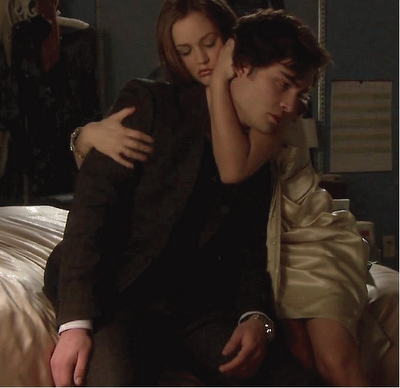 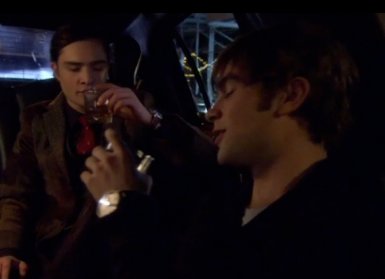 Though Chuck’s initial reaction to this reveal was to run like heck, eventually, he did manage to sit down for an adult heart-to-heart, with Whorey van Whoreson.  Of course, it wasn’t long before mother and child were forced to grapple with the overwhelmingly ickly realization that Chuck’s mommy had been porking his best friend and roommate just inches away from where Chuck slept.  “I was planning on watching you from afar,” Diana said.

“Nate’s bed isn’t that far,” Chuck quipped.  (Well, she sure walked right into that one!) 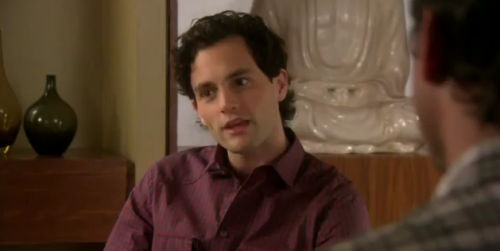 In other much less interesting news, Blair and the Donut had the Lamest Coming Out Party ever . . . In fact, it was soooo bad, they both had to leave at the same time “to get ice.”  (You know a party is crap, when the hosts can’t even wait to leave it.)  To make matters worse, the Happy Couple, couldn’t even be bothered to invite their REAL friends, the Non-Judging Breakfast club to their party.  Of course, the crew ended up crashing anyway.  But it didn’t save the lameness of the event . . . or this increasingly sour storyline . . .

You know what might have saved this party though . . . some dancing . . .maybe even a little disco dancing.

The few of you out there, who used to read my Gleecaps know that the show and I haven’t exactly been speaking terms lately.  And yet, each week, I always manage to find some aspect of the episode that I love.  This week my heart went out to a sassy cross dresser named Unique, and her Boogie, Boogie Shoes . . .

Also, Lord Tubbington made an appearance . . . the fat cat, who to this day, remains my favorite Glee character of all time.  I mean, just look at how talented this cat is!  And how many cats do YOU know who can actually say they were in a sex tape . . . 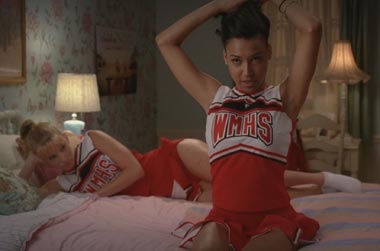 I also love that Brittany came up with the idea to apply Santana for a cheerleading college scholarship, though I suspect it was actually Sue who penned the application, and possibly wrote the essay too.  After all, it would take a VERY liberal, liberal arts college to accept a higher education application that was written in crayon, and featured a hand-drawn picture of Lord Tubbington on the bottom . . .

It would be easy to write Brittany off as “just another stereotypical dumb blonde.”  And yet, the character can be surprisingly astute sometimes, especially when it comes to Santana.  Perhaps, a more accurate way to describe Brittany would be “childlike.”  Speaking of children . . .

Ahhh, if it isn’t the “my period is late, and now I have to reevaluate my life priorities” Baby Scare Storyline.  We’ve all seen it about a million times before.  And yet, there really is no fake baby like a Fake Schmidt Baby, who requires his very own Douche Baby Jar.

But Cece isn’t the only cast member contemplating her ablity to be a mom.  Jess too is forced to take on the role of the Dreaded Adult, when she is asked to babysit Russell’s 11-year old Sarah.  But Sarah isn’t just your ordinary, garden variety 11-year old. In fact, she just so happens to share the collective brain of every Nick fangirl who watches this show.

Truth be told, she would very much like to “rub [her] face all over his face” (but not all over his eyes . . . you know, because of the whole “poop” thing).  Sarah’s episode-long love for Nick is great for the show, for a few reasons.  For starters, she gets Jess to admit that Nick is hot, “in a rumpled, small town PI-kind of way.”

Sarah also seems to singlehandedly break Nick of his already three-or-four episode long habit of dating college girls, by inadvertently showing him JUST how much younger than him they actually are.  (Hint: His current date used to ride the school bus with Sarah.)

But, best of all, Sarah’s little temper tantrum, get’s Nick and Jess to sit on the floor together,  outside their bedroom door, stare dreamily into one another’s eyes,  and each confess to Sarah why they are both so terrible for OTHER people to date, while, at the same time, proving just how perfect they are for ONE ANOTHER to date.

So, hooray for Sarah.  But I still can’t figure out how she was spawned from these two .  . .

I mean, red-headedness is supposed to be a recessive trait, right?

Oh, and, just in case you were curious, Cece and Schmidt aren’t pregnant.  So, there little “caramel miracle-to be” may have to wait another season.