Hot Box Time Machine – Lost’s “Happily Ever After” Q & A 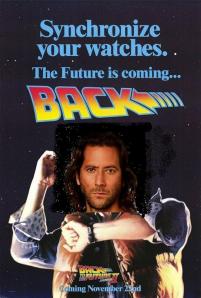 Tonight’s episode of Lost marks yet another chapter in the tale of our favorite Scottish time (and dimension?) – traveler, Desmond Hume.  This is our seventh Desmond-centric Lost episode. (For those nitpickers out there, I am counting the two hours of “Live Together, Die Alone” as separate episodes . . . basically, because I like the number seven, DAMMIT!)  To me, Desmond’s episodes have sort of a different feel than the episodes we typically see on Lost.  While all Lost episodes deal with themes of love, destiny, good versus evil, and science versus faith, Desmond-y episodes seem to express those themes in a more heady, philosophical way.

Tonight’s episode was no exception.  During “Happily Ever After,” we definitely learned a thing or two about our hero, as well as the overall mythology of Lost.  Here are just some of the questions that were answered during this hour:

Why is Desmond “The Package?”

Desmond is The Package because he looks like this . . .

Superpowers?  Cool!  Can he leap tall buildings in a single bound, like Superman?

Ummmm  . . . no.  But he CAN be shocked with thousands of volts of electromagnetic energy without, you know, dying.  He can also toggle back and forth through time and alternate dimensions, without having to take a dip in a Hot Tub, or jump in a DeLorean with a young Michael J. Fox.

So what does that have to do with Charles Widmore?  Why does HE need Desmond back on the Island?

Two words: Course Correction.  If you recall (Of course, you recall.  Your a Lost fan.  You remember EVERYTHING.  And have the screencaps to prove it), back at the end of last season, Juliet detonated a bomb on the island back in 1974, in hopes of preventing Oceanic Flight 815 from ever crashing on the island.  Instead, her actions set off a major chain of events (i.e. that whole flash-sideways business) that left a lot of Losties extremely UNLIKELY to get laid in the foreseeable future.

For starters, in Flash-Sideways World, Desmond’s not with his “soul mate” Penny, which means she can’t bear his child.

No, I’m NOT taking about the bat-shit crazy version!  (NO ONE wants to meet HER!)  I’m referring to the  sweet, innocent, hygenic version from the first three seasons . . .

(Sidenote:  Was it me, or has Charlie’s hairline receded IMMENSELY since we last saw him on this show?  Perhaps hair loss is another side effect of living in Flash-sideways World, because Jack Shephard seems to be having the same “follicular” issues, of late.) 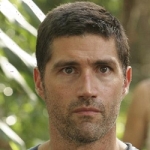 Speaking of Jack, in Flash-Sideways World, he and Sawyer never made out with / screwed (in a bear cage) Kate

Sayid’s not with Nadia.  Jin’s not married to Sun, so her and their child may DIE.  Daniel never met Charlotte.  Hurley never met Miles.

As for Widmore, a permanent existence in Flash-Sideways World will undoubtedly result in the loss of his daughter Penny, his grandchild, and his son.  Oh, and did I mention that he will be stuck married to this scary biatch?

As if all that wasn’t bad enough, you and I would be stuck watching Friends reruns on Tuesday nights at 9 . . .  It’s a dystopian society, indeed!  And so, understandably, Widmore has hired Time-Traveling Desmond to merge the two timelines created by the bomb’s blast back into a single timeline, where they belong.

How the heck is Desmond going to do that?

One word: The Constant.  (well, that’s actually two words.  Sorry?)  Remember when Desmond was doing all those weird mind-warp time traveling things back during Season 4?  (During the episode conveniently entitled “The Constant.” )  Do you also remember how Daniel Faraday, who was experimenting with time travel at the time, had written in his journal – “Desmond Hume will be my constant?”

(Presumably the aforementioned statement meant that whatever year it happened to be, Desmond would provide Daniel with the personal connection he needed to gain a necessary foothold in his current timeline)

Well, it seems that Widmore would like to hire out Desmond to be The Constant for everyone on Oceanic Flight 815 . . . well, at least everyone that mattered.  Presumably, Desmond will do this by making all of the passengers AWARE of the original timeline, the memory of which, as we learned today, lies buried in all of their subconscious minds.

How exactly is Desmond going to convince the other Losties about the original timeline?  Because if some stranger walked up to me and told me (with a Scottish accent, no less) that I was stuck in the wrong dimension, I would run in the other direction FAST!

I have one more word for you: LOVE

Charlie (perhaps unwittingly) awakened Desmond to the existence of the original timeline, when the car the pair was driving, swerved off road and went underwater.  When Desmond tried to free Charlie from the drowning car, Charlie’s hand pressed against its window, revealing this message:

Of course, this was the same message, Charlie showed Desmond before dying during the Season 3 Lost finale episode “Through the Looking Glass.”  The message was intended to inform Desmond that the “rescue” boat that had been sent for them, was not sent to the island by Desmond’s lover, Penny.  Rather, it was a trap.  Seeing this message again, triggers Desmond’s alt-timeline memories of his love for Penny.  These memories come at him full force, later on in the episode, while he is receiving electromagnetic pulses to his brain during an MRI.  Likewise, both Charlie and Daniel Faraday began to recall THEIR alternate existences, upon seeing their respective Lostie lovers Claire and Charlotte in person.

Presumably, armed with the Oceanic Flight 815 manifest provided to him by former fellow alt-world time traveler, George Minkowski  (a chauffer and lackey for Charles Widmore in Flash-Sideways World) . . .

time traveling + NO superpowers = insanity, lots of nosebleeds, and a painful death . ..

Desmond will find all the Losties in Flash-Sideways World and attempt to trigger their memories of Real World, by tantalizing them with suggestions of lovers from another dimension . . .  which, leads me to my last question:

Next week on Lost, we get to watch loveable Lostie Hurley talk to more dead people, make more dry (but hilarious) comments about the current state of the show, and (probably) eat some tasty treats along with way.  Awesome!