Welcome back, fellow Fangbangers!  It’s Tuesday, and you know what that means . . .  You got it!  The third of six True Blood Minisodes has just been “leaked” online.

(Seeing as how one of these puppies has been “leaked” every Tuesday, since April 27th, I’m pretty sure that this has been HBO’s grand plan all along.  Just a little something to get us nerdy bloggers all riled up about the show, and feeling special.  After all, WE (and everyone else with a computer who knows how to use a Search Engine) get to see the minisodes, before HBO ACTUALLY airs them on Sunday nights.  Still, it’s a pretty ingenious marketing tool, if you ask me . . .)

This week’s installment of  “A Drop of True Blood” features our three favorite Bon Temps girls: BFF’s Sookie and Tara (who, quite honestly, have been seeming a lot less chummy, of late) . . . 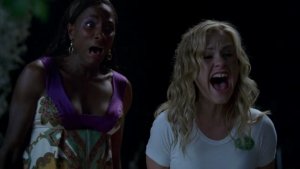 They just found out I spilled the beans about the whole “Tuesday internet leak” thing.  Don’t worry ladies, I promise to keep it between just us girls . . .

Now, initially, I was under the impression that these minisodes were supposed to take place at some point in time, between Seasons 2 and 3.  Here, we see that this is not necessarily the case.  This minisode, in particular, seems more like a deleted scene from the Season 2 finale than anything “new.”  For one thing, check out the dress Sookie is showing off to Tara at Merlotte’s.  Does it look familiar to you?

Of course, there’s a second, much more obvious, reason why I think that this scene had to have occurred chronologically before the Season 2 Finale concluded.  But, I’ll let you figure that one out for yourselves . . .  Roll the clip . . .

(If, for any reason, this video disappears before you get to see it, you can also catch it at Dread Central and Jivid.com.)

Now that I think about it, there’s a third reason this scene had to take place before the Season 2 finale ended. Did you pick up on it?  I’ll give you a hint.

While we’re sharing, HBO has also released its newest promo for the show today.  And if big blue dogs, and bad CGI graphics (sorry Alan Ball) are your thing, you’re going to love this one . . .

If this promo is any indication, I’m thinking there’s a good chance that the next True Blood minisode will feature Bon Temps’ newest visitor and werewolf, Alcide Herveaux, played by Joe Mangiello, of One Tree Hill fame. 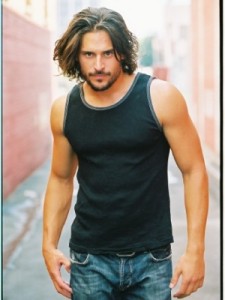 (For more on the new cast members signing on for Season 3 of True Blood, click here.)

And if, by any chance, you missed any of the True Blood Minisodes that have already aired, you can catch the first one, which features a tracksuit- wearing Vampire Eric and a bisexual Vampire Pam auditioning new dancers for Fangtasia Bar, here . . . 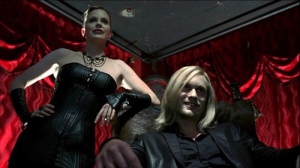 . . . and the second one, which involves a casino-hopping and hungry Vampire Jessica, here. 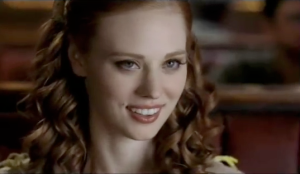 Thirsty for more, True Blood goodness?  Check out the show’s newest fan, Lola at Lovely Entropy, and her take on Vampire Bill’s penchant for that hideous hillbilly shirt he always wears.  (I laughed until I peed!)

True Blood premieres Sunday, June 13th on HBO.  Be there, or be eaten by vampires . . . and werewolves, of course.