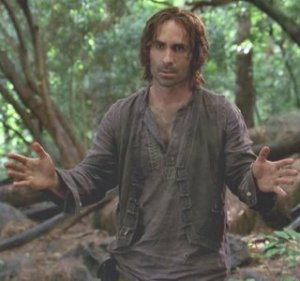 Tonight’s episode of Lost presented me with a bit of a conundrum.  You see, I have this little ritual I like to follow on Tuesday nights.  And “Ab Aeterno” totally f-ed it up.

You see, normally, I watch my hour of Lost, with notepad in hand.  And then, immediately afterward, I plop down in front of my computer to draft a recap (complete with pictures  . . . some of Lost stuff, some of other stuff that I happen to find cool at the moment).  The purpose of my recap is to generally detail the events of the episode, and the small tidbits of information I gleaned from it, in a manner that is mildly sarcastic, and (I hope) a little bit funny.

The problem here is that Ab Aeterno was so jam-packed with information and answered questions, that I couldn’t imagine being able to succinctly convey all of the “facts,” while still successfully telling a story, let alone, being mildly sarcastic and/or at all funny . . .

Therefore, this is what I decided to do . . . I’m going provide YOU with a short and sweet list of of the long- held questions that tonight’s episode of Lost finally answered.  Then, once that’s out of the way, I’ll come back and tackle the story of the episode, in another blog entry (assuming my brain isn’t too fried, of course) . . .

“Shut up and start talking!”

1) What the F does Ab Aeterno mean?

Ab Aeterno is a Latin term meaning “from eternity” or “since the beginning.”  I presume in Lost world it refers to the struggle between:

Jacob versus the Man In Black a.k.a. Smokey AND/OR

The Man Upstairs versus The Devil AND/OR

Heaven versus Hell AND/OR

Life versus Death (Bet you didn’t know Lost was going to get all religious on you, did you?)

2) Why the F doesn’t Richard Alpert ever age?  And where can I get some of that for myself?

Richard Alpert doesn’t age because he is immortal.  Richard received this “gift” from Jacob, in return for agreeing to work for Jacob against the latter’s nemesis, Man in Black a.k.a. Smokey.

And, no, YOU can’t get any of that for yourself because YOU don’t work for Jacob.  So, YOU are going to have to get old and moldy and eventually die, like everyone else on this planet.

3) What do you mean Richard “works for Jacob?”  What exactly does he do?

Richard’s job is to work as Jacob’s emissary on the Island.  He is supposed to influence the Losties to do “good,” and help them to avoid the temptation to sin.

4) Huh?  Why the heck does Jacob care what the Losties do?  Why doesn’t he just mind his own beeswax?

So, to test out his little theory, Jacob keeps making people with dubious pasts crash onto the island, so that he can REDEEM them, and show MIB what’s what!

5) Man in Black / Smokey keeps talking about wanting to “Go Home.”  He seems like a pretty powerful mother f-er to me!  Why doesn’t he just LEAVE?

Remember that story you read when you were little, called Pandora’s Box?  You know the one where Pandora had this box that housed all the evil in the world.  And when she opened it, all the evil escaped?  Well, according to Jacob, the Island is kind of like “Pandora’s wine bottle.”

Man in Black / Smokey is an EVVVIIIIL force swirling around in a vaccuum, kind of like wine in a bottle.  The island is like the bottle’s cork.  It keeps the EVVVIILLL from escaping out into the real world . . .

6) What’s the deal with Team Jacob?  Why are its members’ names listed on Jacob’s wheel and Man in Black / Smokey’s cabin wall?  And why is Ilana stuck protecting them all?

You see, EVVVILLL MIB believes that he can escape the island if, and only IF, he kills Jacob.  Worried that MIB is correct in his assumption, Jacob has to keep finding replacements for himself.  These replacements will ultimately take over Jacob’s task of keeping new Losties “good” and preventing MIB from blowing this island popsicle stand.

Ilana has the dubious honor of keeping the prospective replacements both “good” and “alive.”

7) How about that slave ship, The Black Rock, that was found shipwrecked on the island?  How did that get there?

The Black Rock was a ship owned by Mangus Hanso during the late 19th century. (Get it?  HANSO, as in the “Hanso Foundation?” You know, the group that started the Dharma Initiative on the Island back in the 70’s?)

The Black Rock washed up on the island, as a result of a tidal wave, back in 1867.  Richard first arrived on the island as a prisoner on that ship.  Yeah, he’s THAT old . . .

8) Is your brain hurting as much as mine is right now?