Anatomy of the EXTENDED Trailer for Season 2 of The Vampire Diaries! (Includes BRAND NEW Scenes!)

It’s here!  It’s here!  After months of making us wait, the CW has FINALLY given us Vampire Diaries fans the action-packed, new scene- filled, drool-worthy, trailer WE deserve!  And, from what I’m seeing here, Season 2 will NOT disappoint!  Check it out for yourself .  . .

Let’s analyze, shall we?

:00 – For those of you curious about the song in the trailer, it’s entitled “Make Me Wanna Die.” The song was produced by a band called Pretty Reckless,  which is headlined by none other than Annoying Little J / Jenny Humphrey from Gossip Girl, herself, Taylor Momsen . . .

I almost hate to say it, but she doesn’t sound half bad!

This scene gave me the chills!  A few months back, David Anders, who played the sublimely creepy Uncle John Gilbert on the show

(and who just so happens to be Elena’s biological Daddy, along with Mom-from-Hell, Isobel), admitted that he would be back for at least one more episode of Season 2 of The Vampire Diaries.  This confused the crap out of precisely everyone, seeing as HIS CHARACTER was one of the confirmed fatalities in the show’s May 2010 Season Finale, Founders’ Day.

Having the finger containing your Ring of Immortality chopped off your hand, just moments before being staked in the stomach, can do that to a guy . . .

This surprisingly scary trailer scene, in which Elena arrives home to find Uncle / Father John stretched out on her floor, bleeding to death, and calls 911, while her Evil Doppelganger, Vampire Katherine, looks on with menace, may serve to clear some of the aforementioned discrepancies . . .

Observe the luscious lips, and the equally luscious tongue licking them . . .

. . . and THIS is the face of the OTHER Hot Vampire who just found out his girlfriend may have cheated on him . . .

We feel your pain, Stefan!

As if finding her Bio-Dad bleeding to death on her kitchen floor wasn’t BAD enough, just moments later, Elena finds her little brother Jeremy unconscious, after a potentially fatal sleeping pill overdose.  What she DOESN’T know, is that before taking those pills, Jeremy ALSO ingested a nice dollop of HIS now-dead, dead, girlfriend, Vampire Anna’s blood . . . 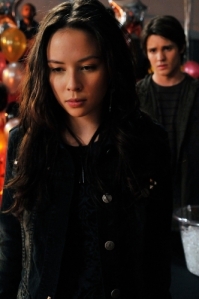 So the question remains, is Jeremy Gilbert dead . . . or undead? 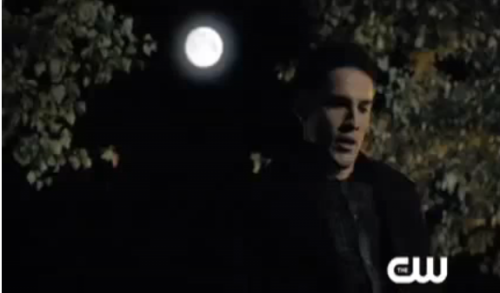 And we ALL KNOW what happens during a full moon to folks like Tyler Lockwood, right? 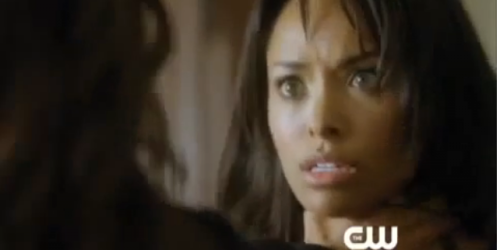 Apparently, it isn’t a Vampire / Witch Party, until somebody gets strangled . . .

KATHERINE: “Wanna play with me?”

(This scene made me feel all tingly inside.  Is it weird that I think Vampire Katherine may have more on-screen chemistry with Stefan, than Elena does?) 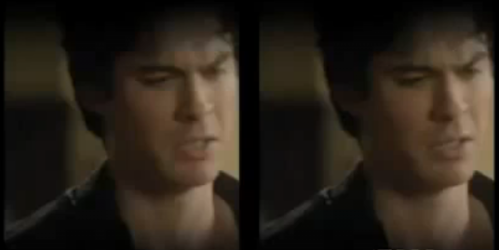 Man, does he look angsty and broody in this screenshot!  Mommy LIKE!

:49 – This next scene requires no explanation whatsoever, except for the following, “OMFG!”

This scene is a bit of a rehash from the one we saw in The Vampire Diaries “The Return” trailer released exclusively at this year’s Comic Con.  But that doesn’t make what Vampire Katherine says in the scene any less shocking, the second time around . . .

How about kiss her, THAN kill her, Damon?  Who says you can’t have your cake, and eat it too?

Salvatore and Salvatore!  Reunited and it feels SO good! 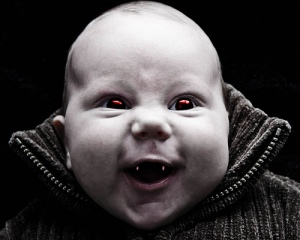 It looks like Season 2 of The Vampire Diaries will definitely be The Year . . .

The Vampire Diaries premieres Thursday, September 9th at 8 p.m. on the CW.  Will YOU see it?  Wait . . . why am I even asking?  OF COURSE YOU WILL!

Filed under Spoilers and Sneak Peaks, The Vampire Diaries

The Vampire Diaries Newest Villain, Mason Lockwood – Who would YOU cast? 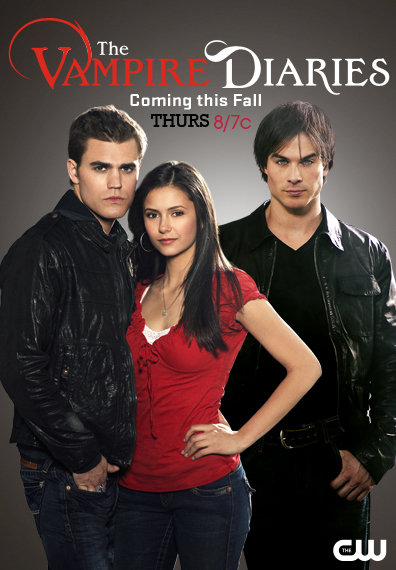 Have you been chomping at the bit (no pun intended) for The Vampire Diaries to return from its already WAY TOO LONG hiatus?  Well, here’s some Season 2 scoopage to tide you over.  Apparently, bloodsucking vampires and witches on a rampage won’t be the only “supernatural problems” Mystic Falls will have to deal with next year.  Now, the not-so-sleepy Virginia town will also have to contend with . . . WEREWOLVES. 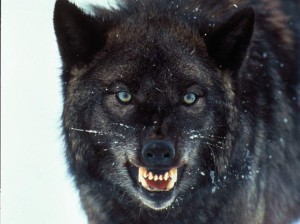 If you recall, during the show’s spectacular Season 1 finale episode, “Founders’ Day,” both Tyler Lockwood (played by Michael Trevino) . . .

. . . and his father, the Mayor, exhibited some “wolfy” tendencies, when faced with a “witchy” invention, whose intended purpose was to immobilize supernatural creatures.  Unfortunately, Mayor Lockwood didn’t survive the episode.

But, apparently, this means that his younger, hotter, brother must come to town and step into his shoes, or, perhaps more accurately, his doggie booties . . .

According to Michael Ausiello, over at Entertainment Weekly, the folks down at The Vampire Diaries have recently put out the following casting call:

Mason Lockwood: Described as Tyler’s “cool” uncle, Mason is sexy and athletic and possesses an easygoing charm. Though he has more control than his nephew, he can “flip in an instant” if crossed. Seeking Latin or Caucasian actors in their 30s for this recurring role.

Riiiiight, because that’s EXACTLY what The Vampire Diaries needs . . . MORE HOT MEN THAT LOOK GOOD WITH THEIR SHIRTS OFF (or open) . . .

Blatant male objectification aside, I thought it might be fun for me to try my hand at casting Mason Lockwood.  Here are my top five picks, in no particular order . . .

Where you’ ve seen him before:  He played Lex Luthor on Smallville.

Why he’d make a good Mason:  Let’s face it, no one does “sexy villian on a teen drama” like Michael Rosenbaum (except, maybe, Ian Somerhalder,  ;)).  Not only is Michael already a familiar face on the CW network, he’s definitely got the acting chops to pull off a “two-natured” (in more ways than one) role like this one.  It also might be nice to seem him in a role where he has HAIR, for a change . . .

Age: 33 (just turned on July 8th – Happy belated, Milo!  What’s with me picking all these July babies for this role?)

Where you’ve seen him before: He played Peter Petrelli on Heroes and Jesse Mariano on Gilmore Girls.

Why he’d make a good Mason: Like Michael Rosenbaum, Milo is no stranger to the CW network (See Gilmore Girls reference above).  Nor would he be out of his element on a show featuring supernatural elements (See Heroes reference above).  Milo has already proven himself capable of playing a charming and likeable, yet volatile, persona.  He also bears a striking resemblance to Michael Trevino, who would play his nephew on the show.  And did you SEE that body?  Need I say more? 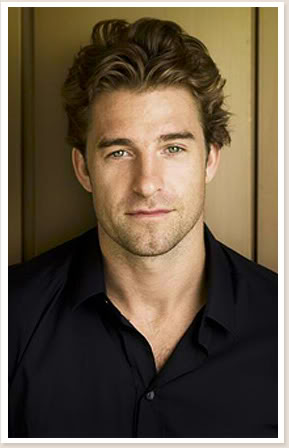 Where you’ve seen him before:  He played Ben Covington on Felicity, and Michael Corvin in all those Underworld movies.

Why he’d make a good Mason:  I can’t think of better preparation for playing a werewolf on a show featuring vampires and werewolves, than starring in a movie series as a  vampire / werewolf hybrid.  Can you?  Unlike Michael and Milo, Scott never starred on the CW, but he DID star on its predecessor channel, the WB, during his Felicity years.  Through Scott’s previous roles, he has definitely shown that he has enough innate masculinity and barely suppressed rage to fit in with the Lockwood clan.  And that uniquely raspy voice of his?  Pure sex . . .

Where you’ve seen him before: Those Fast and Furious movies

Why he’d make a good Mason:  I’m not gonna lie.  I chose Paul almost exclusively for his beauty . . . and his body . . . and because Kerr Smith and Benjamin McKenzie are both already tied up with other television shows.  What can I say?  I’m only human!

Where you’ve seen him before: He played that hot lawnmower dude, John, who got it on with Eva Langoria on Desperate Housewives.  He also played the title role in John Tucker Must Die.  (Too bad this character isn’t named “John.”  Because Jesse would have had the role in the bag.)

Why he’d make a good Mason:  Like Milo, I think Jesse kind of looks like Michael Trevino, which would weigh in his favor, for a part like this.  Plus, if these werewolves are anything like the werewolves in the Twilight series, they are going to have to be shirtless A LOT.  Clearly, this will be NO problem for Jesse.  On a more serious (and slightly selfish) note, Jesse Metcalfe is a very talented actor, and I’d really like to see him on my small screen again.

(Note:  When I was researching this post, I learned that Jesse Metcalfe is actually set to star in a new Jerry Bruckheimer-produced NBC pilot this fall, entitled Chase.  But everyone knows that most pilots don’t actually get picked up by the networks.  So as far as I am concerned, he’s still in the running  😉 . . .)

So, those are my picks.   Who would YOU cast as Mason Lockwood?

[ Season 2 of the Vampire Diaries premieres Thursday, September 9th at 8 p.m. on the CW Network. ]

P.S.  Apparently, less than 24-hours after I wrote this blog post, the producers over at The Vampire Diaries released their ACTUAL casting choice for Mason Lockwood.  (Special thanks to Amy, over at the always entertaining and fabulously fangirly imaginarymen blog, and first commenter Ellen O., for the late-breaking scoop!)  And the winner is . . . THIS GUY . . .

Taylor Kinney, who was best known for his role as EMT Glenn Morris on the NBC drama Trauma.  (Hey, that rhymes!)  And, just in case you were curious, here’s what he looks like without his shirt on . . . 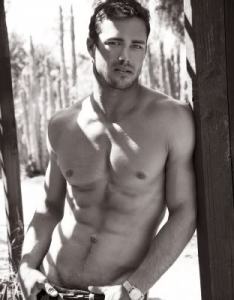 Filed under casting, Spoilers and Sneak Peaks, The Vampire Diaries