Anatomy of a Trailer – Touchstone Pictures’ “You Again”

OK.  So, a film about a former high school nerd, who is now “all-grown up” and successful, but soon finds herself reverting back to her old ways, when the school bully conveniently re-enters her life?  It’s not exactly the most original movie premise out there.  And yet, with a cast that includes none other than:

and the always ADORABLE Betty White

. . . I simply HAD to post this trailer.  So, here it is (special thanks to TrailerDelinquent, over at YouTube, for posting this):

:12 – I’m not sure how I feel about Jaime Lee Curtis and Victor Garber as Kristen Bell’s parents.  Don’t get me wrong, they are both GREAT actors.  It’s just that they are so “dark complected” compared to Bell’s blonde, fair-skinned, look.  Maybe she is supposed have been adopted?

That being said .  . . I’m TOTALLY loving Garber’s “doo-rag” in this dinner scene!

:28 – I was wondering how they would make the super cute Kristen Bell into a convincing nerd, for “flashback scene” purposes.  I don’t have to wonder anymore . . .

Now, do you see what I mean about the pimples?

:54 – It definitely looks like they photoshopped together ACTUAL high school pictures of Jaime Lee Curtis and Sigourney Weaver to make this fake yearbook picture.  (Devil horns not included, of course.) 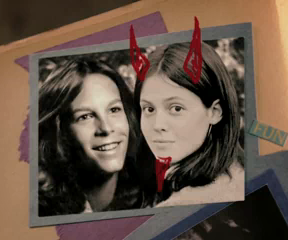 Sheesh!  The woman does ONE movie with Lindsay Lohan . . . 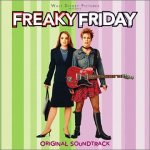 . . .  and already she’s exposing herself in public.  This is yet another GREAT reason to ban “Lilo” from all future cinematic appearances!

1:16 and 1:48 – For a movie trailer, this has has a surprisingly  good soundtrack!  The first song you hear is “Good Girls Go Bad,” by Cobra Starship.  The second one is Little Jackie’s “The World Should Revolve Around Me.”  Remind me to add these two tracks to my ipod, OK? 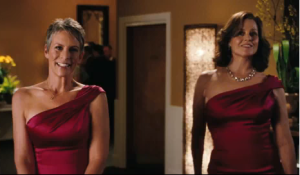 Sorry Jamie Lee!  I’m going to have to go with Sigourney on this one . . .