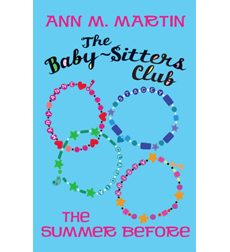 The Summer Before, a prequel to the critically acclaimed (not to mention AWESOME) Babysitter’s Club series is now available in bookstores.  The first four books in the original series are also being updated and re-released.

Sweet Valley Confidential, a book that chronicles the lives of the gorgeous and popular Wakefield twins, Elizabeth and Jessica, as they enter their late 20s and early 30s, should hit bookstores around February 2011.

Upon reaching the ripe old age of seven, I unilaterally decided that I was TOO OLD to read picture books.  And so, after pleading my case to my mother one weekend, the two of us hit the library, in search of “Big Girl Books.”  Holding my mother’s hand, I steered her clear away from the Children’s Book section, and headed determinedly toward the section containing books for “Juveniles and Young Adults.”

Two series immediately caught my eye, based on the sheer volume of related books to choose from.  Both sets of books offered “pretty” covers, featuring enviably attractive “Big Girls,” who appeared to be significantly older, wiser, and cooler than myself.  (Who says you can’t judge a book by its cover?)  The names of the two series?  The Babysitter’s Club and Sweet Valley Twins!  I grabbed the first two books of each series off the shelf, and was on my way.  And so began my long-term childhood friendship with a motley crew of babysitters, and two twin girls with vastly different personalities . . .

For the uninitiated, The Babysitters Club was initially comprised of four girls.  Bossy Tomboy Kristy, Shy and Sensitive Mary Anne, Boycrazy New York Native Stacey, and the Artistic, but Academically Challenged, Claudia.  In later books, the Club expanded to include Vegetarian California Girl Dawn and junior members – Bookish Horse lover Mallory, and Graceful Ballet Dancer Jessi.  Most of the books would focus on the adventures of one particular club member, while using the babysitting experiences of  her friends as subplots.  As for me, I was probably most like the  Mary Anne character, but WANTED to be most like Stacey, because she was BLONDE,  POPULAR, GOOD AT MATH, and all the boys liked her.  Sure, Mary Anne had Logan as a boyfriend, but honestly, he seemed pretty lame.  (I’m sorry, but how many manly middle school boys do you know that actually ENJOYED babysitting?)

“Think she’d notice, if I closed my eyes and pretended she was a DUDE?”

I absolutely ADORED these books.  And spent WAY too much time fretting over the lives of the aforementioned characters.  (“OMG!  Kristy is moving into a mansion!  She’s so lucky!”)  (“WOW!  Dawn and Mary Anne are stepsisters now.  FUN!”)  (“WTF!  Stacey is moving away!”)  (“OH NO!  Claudia thinks she’s ADOPTED!”)

In addition to reading the books, I also owned a Babysitters Club wall calendar, postcard book, and diary.

Some of my friends and I even attempted to start our own babysitters club.  However, since the oldest of us was 9 at the time, we didn’t get many clients . . .  For a time, I even tried to draw little hearts over my “i” s when writing in school, like the Stacey character did in her babysitting journal entries,  but that didn’t stick either . . .

Ann M. Martin wrote literally hundreds of Babysitters books.  The original series ran from 1986 through 2000.  And you know what?  In all that time, the kids NEVER AGED!  By the time the series ended, these characters seemed more like kids that I would babysit, instead of the other way around.  I have a theory as to why this is, but I’d rather keep it to myself, if you don’t mind . . .

And now, after nearly a decade away, it appears that the girls are about to get even YOUNGER! Age discrepancies aside, when I heard that Ann M. Martin was writing a prequel to the series entitled, The Summer Before, I was super psyched!  I don’t care that I’m too old, I am TOTALLY reading this book.  The seven-year old inside of me demands it!

Of course, part of me wishes that Martin had chosen to write a sequel, instead of a prequel, so that I could finally find out whether my babysitting pals ever actually graduated the eighth grade . . .  But until that happens, at least I will be able to check in on my OTHER friends, the Wakefields.

If The Babysitters Club were the fictional girls that I most wanted as my friends, the Wakefield twins were the fictional girls I most wanted to BE!  It was as if Francine Pascal, took the super cool Stacey character from The Babysitters series, transplanted her to the West Coast, cloned her, and gave her a book series all her own!  Elizabeth was the smart, conscientious one — an excellent student, and class newspaper editor, with designs on a future career in journalism.   She was kind of a goody-goody, and a tad boring, most of the time.  So, of course, I related to her the most (even though I didn’t really want to) . . .

Jessica was a Total Bitch!  Your classic mean girl.

She could care less about school or grades.  And was only interested in boys and popularity, and her snooty “elite” club called The Unicorns.

Really, Francine Pascal?  This was what you chose as your “Cool Girl” Mascot?

Throughout most of the series, Jessica took advantage of Elizabeth and generally treated her like crap.  But, like any abusive relationship, she always apologized during the last few pages.  So, Elizabeth, a glutton for punishment, took her back.  And for some reason, despite all her evilness, us readers liked her anyway . . . (We even liked her more than we liked Elizabeth, although most of us didn’t want to admit it . . .)

Unlike The Babysitters Club series, which focused exclusively on the characters’ middle school years.  We got to watch Elizabeth and Jessica Wakefield throughout their childhood, and up through young adulthood.  In fact, before the first book in the  Sweet Valley Twins series was even released, there was Sweet Valley High, which detailed the highschool adventures of the Wakefield twins.

Unfortunately, for whatever reason (she never told me why), my mom wouldn’t let me read these books.  I eventually read the first few when I was a bit older.  And they WERE surprisingly risque, especially considering the time during which they were written.  Upon turning 14, Jessica Wakefield went from just being a bitch, to being a bitch AND a slut.

In addition to these two series, Francine Pascal went on to release Sweet Valley Kids, which featured the twins in second and third grade . . . 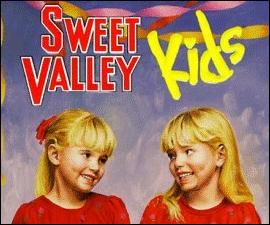 Sweet Valley Senior Year (self explanatory), and the Sweet Valley University series.  Oh, and of course, there was a TV show . . .

After taking a few years off, it appears that the Wakefield twins are back in action.  In addition to the new Sweet Valley Confidential book (or, as I like to call it, Sweet Valley Adults), Juno writer, Diablo Cody, is also, apparently, in the process of penning a movie featuring the girls.

. . . although something tells me, were they actually to exist, Elizabeth and Jessica wouldn’t exactly be buddy-buddy with Diablo.  Those tatts alone would send the prissy Wakefields running for the Hollywood Hills.  Now THAT’S something I’d like to see on the big screen!