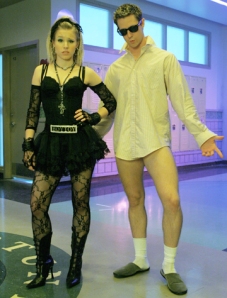 In continuing my tribute to the hottest, most swoon-worthy, couples of our pop culture past and present, I have honed in on a pair of characters whose complex relationship generated more heat and passion during their show’s brisk three season run, then some fictional television couples could muster in ten.  (I’m looking at you Ross and Rachel from Friends .  . .)

Critically acclaimed, but tragically under appreciated by the mainstream public, Veronica Mars allowed viewers a glimpse into the day-to-day life of an intelligent, plucky, take-no-prisoners teen heroine who just so happened to be a private investigator.  And while the show’s various mysteries and crime capers were deftly plotted and placed the show a distinct cut above other teen dramas, it was the romance between Kristen Bell’s Veronica Mars and Jason Dohring’s tortured rich kid Logan Echolls that kept fans like me tuning in week after week.

Let us roll the opening credits, and begin at the beginning, shall we?

Interestingly enough, just like Ross and Rachel, this television twosome actually did start off as friends.  (The “hate” part of our tale came a bit later).  As illustrated by flashbacks throughout the first season, before the Pilot episode, Logan and Veronica were both part of the same exclusive clique, Neptune High’s privileged and popular 09ers.  At the time, Veronica was dating Logan’s best friend, Duncan Kane, and Logan was involved with Veronica’s best friend and Duncan’s sister, Lilly.

The foursome’s friendship began to unravel when Veronica informed Lilly that Logan had cheated on her.  Shortly after Lilly dumped Logan, she was brutally murdered.  A heartbroken Logan soon lashes out against Veronica, under the belief that had Lilly not broken up with him, Logan could have saved her on the night she was murdered.

To exacerbate matters, Veronica’s father, who, at the time, was the town Sheriff, accuses Duncan and Lilly’s father of committing the murder.  Refusing to turn against her father, Veronica stands by him, and is ousted from the 09ers as a result.  Newly single and with a lot of extra time on her hands, Veronica quickly develops the tough exterior she needs to help her father start his own private investigation business.

And this is where things stand when we meet Veronica Mars in the Pilot Episode . . .

Needless to say, things aren’t exactly copacetic between our two protagonists when the series begins.  As if to exemplify this, in the Pilot episode, Veronica frames Logan for in-school drug use  by planting a bong in his locker.  (Not a very nice thing to do . . .).  Logan retaliates by bashing the crap out of the head lights on Veronica’s car.  (ALSO not a particularly nice thing to do . . .)

Things stay fairly chilly between Veronica and Logan until Episode 15 – “Ruskie Business, ” when Logan convinces Veronica to help him find his missing mother, after television footage shows her jumping off a bridge to her death.  Refusing to believe his mother is gone, Logan, with Veronica’s help, tracks a woman using his mother’s name to a 5-star hotel and waits for her to reappear.  When the hotel patron turns out to be Logan’s sister, he is forced to come to terms with his mother’s death, and breaks down in tears, while Veronica attempts to comfort him.

It is at this moment that their friendship is reborn.  The question is for how long can they stay “just friends?”

Apparently, not for long.  In Episode 18 – Weapons of Class Destruction, Logan rescues Veronica when she is kidnapped and taken to a shady motel by a would-be high school terrorist named Ben (played by Jonathan Taylor Thomas), who ends up being a CIA agent.  Overcome with gratitude for Logan’s unexpected heroism, Veronica impulsively plants a brief kiss on Logan’s mouth.  Embarrassed, the young sleuth turns to run away, but Logan pulls her back.  The two stare at one another intently for a few moments before falling into a hot and steamy makeout session.  Yummy!

And just in case, you thought this was just a one time thing . . .

In Episode 19 – Hot Dogs, Logan learns that the deceased Lilly slept with gang member Weevil, while the two were dating.  Logan explains to Veronica that he realizes that he loved Lilly more than Lilly loved him.  Veronica moves to comfort him, but Logan gently pushes her away.  “It’s OK.”  He explains.  “You know, it kind of lets me off the hook.  I don’t have to feel guilty anymore . . . about moving on.”

And before you know it, Veronica and Logan are necking again.  Given their differing social statuses and the impact their relationship will inevitably have on their mutual friend Duncan, the two decide to begin a relationship in secret . . .   Secret sex = so hot!

But, of course, nothing can stay secret for long.  In the process of making out, the new couple inadvertently walk into a surprise party being thrown for Logan by his dad (and Lilly’s murderer, as we will soon learn).  The jig is officially up for these two.  And, because high schoolers can hold a grudge like no one’s business, the 09er crew does not take news of Logan and Veronica’s new relationship well.  In Logan’s entrance foyer, you can cut the tension with a butter knife.

(It’s a meeting of the Neptune Voyeur Society . . . They like to watch.)

Logan, being the hard core guy he is, stands up for Veronica against his snooty friends.  “That’s sort of a general invitation,” he scolds.  “If you don’t like my girlfriend, you can start for the rectangle with the round knob.”

And, thus, in a single scene, we have illustrated the three things Logan and Veronica do best: making out, breaking things, and alienating others . ..

One of the unfortunate things about this show, is that some of its most intense moments take place off screen.  And that is the situation here.  When the season begins, we learn that Veronica has dumped Logan over the summer and has begun dating Duncan.

As it turns out, Logan had kind of a crappy summer. The fact that his dad was being tried for the murder of his former girlfriend certainly didn’t help.  Then, after a drunken evening, he found himself wanted for the murder of a gang member, even though he remembered absolutely nothing about the night in question.  So what does our wise teen do, he burns down the public pool.  Wouldn’t you?

Arson doesn’t exactly sit well with our favorite teen sleuth, so she kicks young Logan to the curb.  But don’t be sad.  This is actually a good thing.  Because like all television couples, Veronica and Logan are at their absolute best when their love is unrequited.  And hence, we had an entire season of dialogue laced with sexual innuendo and longing looks . . .

And it appears that Logan’s Superman complex has not gone away.  In Episode 2.08, Ahoy Mateys, Logan once again comes to Veronica’s rescue when she is attacked by some creepy Irish mob guys in a bar while investigating a case.  He pulls out a gun on their asses and Veronica escapes.  Later, back in the car, Veronica illustrates how much she still cares for Logan when she breaks down in tears.  Contrary to what you might think, she is not crying about being attacked by creepy Irish mob guys (which sure as heck would make ME cry).  Instead, she is crying because she fears that Logan’s heroic antics will get him killed . . .

The sexual tension between Veronica and Logan ALMOST comes to a boiling point in Episode 2.11, Plan B, where the not-so-couple share an intense slow dance with one another.

At yet another dance, a drunk Logan confronts Veronica in what may have been the sweetest scene in the entire series.  (Why are guys always sweeter when they are wasted?  Or maybe that is only in my experience . . .).  Anyway, Logan expresses his fear that after graduation, he and Veronica will part ways for good, and will never be able to see eachother again.  He explains that she has basically ruined him for all other girls (which, as women, is always our ultimate goal, anyway).

“I thought our story was Epic, you know, you and me,” he says.

And now I have to bend over and retrieve my panties, as they just fell on the floor . . .

Initially, at least, Veronica is not as easily won over as I obviously am.  She freaks out over Logan’s unexpected declaration and runs away before the two can share a kiss.  The following morning, she thinks better of this, and visits Logan at the suite where he is staying.  “I don’t want to lose you from my life either,” she admits.

Veronica is about to offer to give their relationship another go, when Logan “claims” not to remember his big Epic speech.  To make matters worse, Veronica soon learns that, after she ditched him, he spent the night with a tarty older woman.  She doesn’t take it well . . .

Fortunately, tragedy brings the couple back together!  Yay tragedy!  In the series finale, Logan rescues Veronica from a fellow student, who just so happens to be a homicidal maniac who killed a good portion of Logan and Veronica’s classmates by sending their school bus off a cliff.  Nice, right?  But it got these two lovebirds back together, so it was totally worth it . . .  (Man, am I shallow!)

I’m not going to spend all that much time on Season 3, The College Years.  Suffice it to say, that Veronica and Logan spent a majority of the time mistrusting one another, fighting, breaking up, and dating other people – and not in a good way.  Fortunately, in the Season Finale, the pair, in their own dysfunctional way, imply that they will be getting back together after the series ends.

It all starts with a sex tape being released of Veronica and her new boring boyfriend Piz.  Logan immediately assumes Piz made the tape and beats the crap out of him.  Veronica is understandably pissed off about this, particularly because it turns out that Piz didn’t make the tape at all . . . some jerky connected mafia student did.

“Oh, that’s not ketchup.  That’s the blood of the D-bag who tried to mess with my girl.”

So, it wasn’t exactly the romantic end we were hoping for.  But, given the unique nature of this relationship, I guess it was kind of par for the course.  It doesn’t make Veronica and Logan’s relationship any less EPIC, as far as I am concerned.

Unfortunately, the series met its untimely end right here, after Season 3.  But we’ll always have YouTUBE . . .