Where the Falls Meets the Creek: Damon and Elena versus Pacey and Joey

Through these long winter hiatus months, since I can’t watch TV, I tend to spend A LOT of time talking about it.  Recently, one television-related conversation, in particular, has been cropping up among my friends on a fairly regular basis.  Not surprisingly, the conversation involves my two FAVORITE shows of all time: The Vampire Diaries and Dawson’s Creek, and my two FAVORITE TV Couples of all time, Damon and Elena and Pacey and Joey.  Coincidentally, both of these aforementioned shows, and ALL FOUR of the aforementioned characters, were produced and penned by THIS GUY . . .

Basically, what my pals and I have been discussing ad nauseum of late, are the many ways in which Damon’s and Elena’s relationship in The Vampire Diaries seems to be following the same trajectory as Pacey’s and Joey’s relationship followed in Dawson’s Creek.  (Truth be told, we are all kind of hoping this means that both stories will have the SAME conclusion.  *hint, hint, wink, wink*)

And so, to commemorate the many conversations that have characterized my TV-less month,  I’ve decided to put all of our collective thoughts on this topic down on screen.  But before I do so, special thanks must be paid to three very special folks, in particular, who helped make this post happen. (So, if you absolutely hate it . . . BLAME THEM! ;)).  A big hug goes out to the Always Brilliant Amy, who once wrote a post similar to this, and who never fails to catch my random Dawson’s references, whenever they pop up in daily conversation (which is quite often); the Always Awesome Cherie who analyzes TV couples like nobody’s business; and Madeleine, who’s insightful comment to one of my posts caused me to go on a tirade that ended up being the genesis for the post you are reading now.

Elena and Joey – Because Everyone Loves a Spunky Orphan!

Both Elena and Joey grew up in small towns that were rich in tradition, and characterized by WAY TOO MANY community gatherings.  At relatively early ages, both girls were orphaned, due to tragic circumstances (OK . . . that was kind of redundant.  Extra points to anyone who can come up with a not “tragic circumstance” that results in someone becoming an orphan).  As a result of said orphan status, both Elena and Joey were raised (at least through their teenage years) by not particularly maternal () 20-something female family members, who, though “nice people,” would much rather be boinking their current Flavor of the Month Boyfriend than raising a teenage girl . . .

As a result of said parentage (or lack thereof), both Elena and Joey became mature beyond their years, highly self-sufficient, spunky, and a bit moody.  Speaking of said moodiness, neither girl is averse to sporting a Poopy PussFace, when things aren’t going her way . . .

Damon and Pacey – Because Black Sheeps have never been so SEXY (or so much fun)!

Both Damon and Pacey are “Bad Boys” in their own right.  Though admittedly, Damon’s murderous bloodsucking ways FAR edge out, Pacey’s “bad grades and back talking” in the naughty department.

Damon and Pacey were both Black Sheep in their respective families.  Their parents were constantly comparing them to their fairer haired, more well-behaved counterparts.  For Damon, that meant being expected to measure up to his brother, Stefan . . .

For Pacey, it was his over-achieving best friend, Dawson . . . 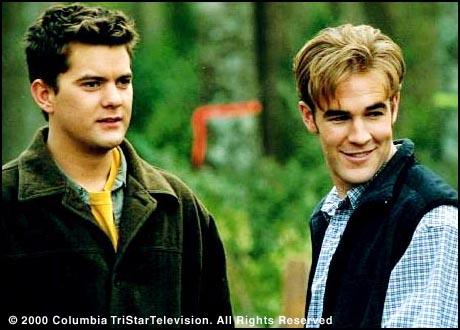 Rather than brood and sulk about these unfair comparisons, Damon and Pacey combatted them with snarkiness, sarcasm, charm, good senses of humor, and matching general “Ughhhh .  . . who cares?” attitudes toward life.

When both The Vampire Diaries and Dawson’s Creek first began, both Damon and Pacey had to take a romantic “backseat” to the fair-haired boys to which they were always compared, when it came to the female objects of their respective desires.  Elena started dating Stefan, around the second episode of The Vampire Diaries . . .

. . . and though Joey and Dawson didn’t actually become a “couple” until the Season 1 Finale of Dawson’s Creek, it was clear, throughout most of the early episodes, that these two had it bad for one another . . .

From Frenemies to Friends (with some SERIOUS SEXUAL TENSION en route)

Though the Blonde Boys had Elena’s and Joey’s hearts, early on in their respective series, the Brooding Brunettes seemed to take up a LOT OF THEIR  energy.  Elena and Joey each expressed some pretty passionate feelings of anger toward Damon and Pacey, during the first few episodes of their shows.  As for Damon and Pacey  . . . well . . . they were just acting like HORN DOGS, plain and simple!  And yet, it’s possible that our Bad Boys suspected even then, that their time for romance was just around the corner.  After all, as Vampire Katherine says, “Hate . . . That sounds like the beginning of a love story.  Not the end of one.”

Eventually, Our Boys’ persistence paid off, and they both became friends with their Dreamgirls . . .

Now, friendships are great and all, but they don’t keep you warm at night.  Our Boys have NEEDS!  So, while Damon and Pacey waited for Elena and Joey to come to their senses, they engaged in sexy times with others.  First, they each hopped into bed with an “Older” Woman.  For Pacey, it was his English Teacher Miss Jacobs.  For Damon, it was his former fling, that OLD AS HECK Vampire, Katherine, who, you guessed it, bore a startling resemblance to Elena . . .

But when those sexual relationships fizzled, it was time to move on to the “Friends with Benefits.”

Both Damon and Pacey were “lucky” enough to find female friends with punky haircuts, who were willing to offer them No Frills Sex, while they both waited for the girls they REALLY wanted.  For Damon it was the ALSO OLD AS HECK, Vampire Rose, for Pacey, it was gal pal, Jen Lindley . . .

I Get By With a Little Dancing Help from my Hot Friends . . .

Though they may have been “getting jiggy” with other girls, Elena and Joey were never far from Damon’s and Pacey’s minds.  And when both females needed a dancing partner in a pinch, each male suitor was right there, and waiting to boogy.  For Joey, she needed Pacey’s dancing feet to help her land a ballroom dancing-related college scholarship.  And though they both had two left feet, the chemistry between the pair on the dance floor, was simply undeniable . . .

As for Damon, he stepped in as Elena’s dance partner, during the Miss Mystic Falls pageant, while Stefan was off on a bloodaholic rampage . . .

On the dance floor, a technically flawless Damon and Elena circled one another, like a pair of very dignified wild animals in heat.  And the highly sexualized way in which they looked at one another, was enough to melt your TV screen . . .

Given the pair’s mad dancing skills, it’s really a wonder Elena didn’t actually win the Miss Mystic Falls competition.  Then again, losing the competition put Elena in good company.  After all, a certain Miss Josephine Potter ALSO garnered the second place spot in HER race for the Miss Capeside crown . . .

Don’t MESS with the GIRLFRIEND of a Brooding Bad Boy!

When Damon and Pacey weren’t sweeping Elena and Joey off their respective feet, they were kicking the crap out of others, to defend their honor.  When some D-bag bully had the NERVE to deface Joey’s high school mural, Pacey THREW HIM OVER A CAR!

(This video may look long.  But, fortunately, the fight scene is right at the beginning.  So, enjoy!)

As for Damon, he was even willing to beat up a GIRL to defend Elena’s honor!  It’s just kind of strange that the GIRL ended up being Elena’s biological mother, and someone with whom he used to do the horizontal mambo . . .

“I love you so much, even the drool on your pillow is sexy!”

Beating the crap out of people to defend your lover’s honor can be tiring.  But do Damon and Pacey just get under their covers, and go to sleep when the fighting’s all over?  HECK NO!  Instead, they simply sit back, relax, and let Elena and Joey do all the sleeping for them . . .

Despite all the sleep-watching, ass-whooping, and screwing Damon and Pacey do, in hopes of forgetting their respective heartaches, sometimes the pain of unrequited love STILL gets to be too much.  And when that happens, Damon and Pacey do what ANY self-respecting Bad Boy would do, in such a situation:  They get sh*t-faced, and self-destructively pour their hearts out to the women they love . . .

(Normally, I’d include Damon’s drunken confessional here too.  However, as you’ll see in a bit, Damon’s drunk speech to Elena is SO INTENSE that it belongs in another category entirely . . .)

Damon and Pacey are both highly romantic creatures, who KNOW unequivocally, when they are in love.  For romantic sexual beings like these, it’s incredibly hard to cope, when the object of your affection OBVIOUSLY feels the same way you do, but is blind to her feelings of love, due to circumstances beyond your control.  When such situations occur, Brooding Bad Boys like Damon and Pacey take the bull by the horns, and confront the women they love, with a strong and forceful kiss on the lips, thereby FORCING the females to take stock in their own feelings.  And yet, there’s a Right and a Wrong way to do such things.

Hint:  Drunk and Self-Destructive Damon (see description above) did it the WRONG WAY . . . 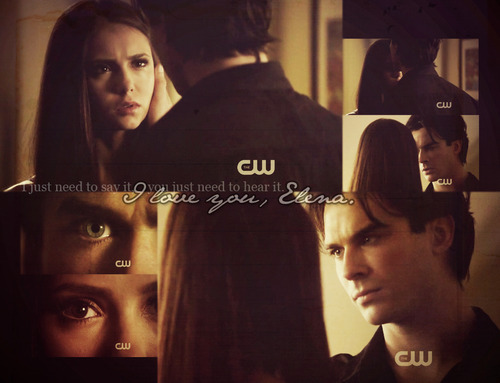 Now sober, a contemplative Damon decides to once again, let Elena know how he feels about her.  However, in contrast to the selfish Take-No-Prisoners Face Rape we witnessed earlier, this time, Damon’s second declaration is all about patience and self-sacrifice.  Convinced that Elena is better off with Stefan, Damon speaks to Elena in a manner that is completely and heartbreakingly selfless.  After all, not only does our lovestruck vampire tell Elena that, even though he loves her, he shouldn’t be with her, for her own good, he also MAKES HER FORGET what he has said, so that she is not faced with making a choice that he feels may ultimately put her in danger . . . 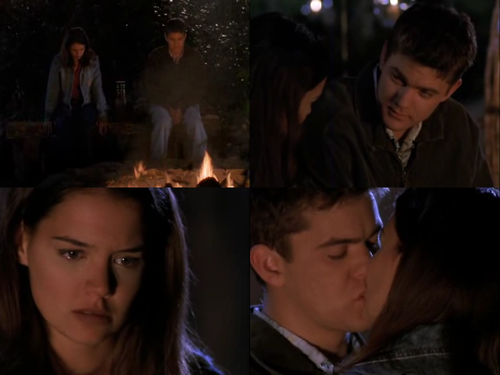 Pacey’s second declaration of love for Joey is also more gentle than his first, and similarly tinged with self-sacrifice.  Rather than going in for a second Face Rape, Pacey actually gives Joey ten seconds to stop the kiss, if she decides that she does not return his affections (well . . . not really . . . but at least he tried).

“I have to protect her.  No matter what the cost” 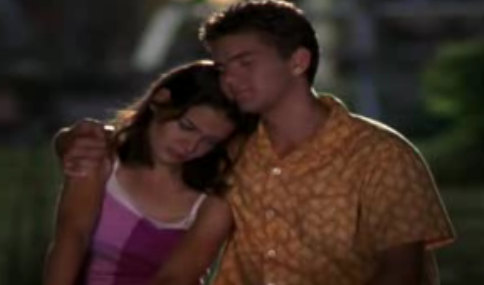 Lest we forget how all this got started, I call your attention to Season 3, Episode 1 of Dawson’s Creek, during which Dawson, who has just rebuffed Joey’s sexual advances for some ridiculously moronic reason that I don’t recall, asks Pacey to “look out for her”  on his behalf.  Pacey, being the loyal friend that he is “reluctantly” agrees to the request . . .

Later, in that same episode, Pacey and Joey share an exchange that we now know marked the beginning of their official courtship . . .

By the way, you know who else, aside from me, is a HUGE Dawson’s Creek fan?  Vampire Katherine.

This is probably why warning bells went off in HER head for Stefan, when he made THIS bonehead (but brilliant, as far as Delena fans are concerned) move at the end of Season 2, Episode 11 of The Vampire Diaries . . .

If Dawson’s Creek is any indication, Delena fans will one day look back at Stefan’s request as the genesis for more or THIS . . .

(Only THIS time, Elena will be on the bottom, NOT Katherine ;))

Well, that’s all I’ve got.  See you on the flipside, my fellow Delena and PJ fans!